Search warrants are documents issued by justices under various pieces of legislation which grant police the right to search a person or a property for evidence of crimes. In the Northern Territory, these search warrants are normally issued under the Police Administration Act. 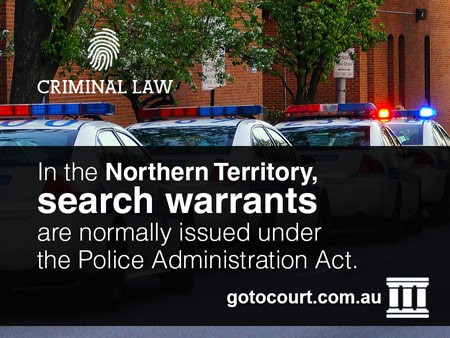 In some circumstances, the police can search a person or a place without the need for a warrant if a detection dog senses the odour of a “dangerous thing” on a person (either on them or within their immediate control) or from a place. Police also have the power, as in other states and the ACT, to execute urgent searches under ss 119 and 119AA of the Police Administration Act. This can relate generally to people and places, and more specifically to unlawful offensive items (such as weapons, explosives or ammunition) found on a person or in a place.

The Northern Territory also has specific laws to allow police to enter and search public grounds used for entertainment (such as showgrounds, sporting venues and racecourses) without a warrant. The Police may then eject anyone who is:

A reputed thief is generally someone who has been found guilty at least twice in the past five years for stealing offences. Failure to comply with police instructions is an offence.

The Police Administration Act contains provisions which relate specifically to searches for dangerous drugs that are, or that police anticipate will be in the next 72 hours, located on a person or at a place. This relates to the search for dangerous drugs, but also drug precursors and drug making equipment. The Act allows the search of all those present at a place, whether connected with the regular occupant(s) or not. The Act also permits the searching police to confiscate both the drugs, precursors or equipment in question, as well as any valuable items or money the police suspect are proceeds of the sale of the drugs in question.

The warrant may describe anything which can be seized during its execution, but under the Act, the executing officer may also seize anything reasonably believed to be in connection with any offence. This makes the power to seize items during a search somewhat wider than in other states and territories. As in other states and the ACT, police may use reasonable force to carry out the search and/or seizure. This may include using force to break into and enter a place, to open cupboards/drawers etc. or even to use reasonable force on a person to conduct a personal search. They can use whatever time is reasonably necessary, including stopping vehicles (and other transports such as trains, ships and planes) to carry out the search.

Those being subjected to a search warrant do have some rights under the Police Administration Act, although these may be more limited than those available in other states. Females may be search by either a female police officer, a medical practitioner authorised by a police member to carry out the search or by another female person authorised by the executing officer. While there is no specific requirement for police to give you a copy of the search warrant, it is certainly advisable to ask for a copy and, at the very least, be given the opportunity to read over the warrant document before allowing police to conduct any search. This may be a copy, and does not necessarily need to be the original search warrant issued by the justice.  In any event, once the police have provided adequate identification and evidence that a search warrant has been issued, it is generally advisable not to hinder them or their search.

Stealing Offences (NT)
In the Northern Territory there are various stealing offences, most of which are governed by the Criminal Code 1983. While the offence of stealing is a property offence, some offences involving theft are composite offences, meaning they involve both property and violence. This article will outline the main offences relating to stealing in the Northern…
Read more…

Criminal Responsibility (NT)
Under the Northern Territory Criminal Code Act 1983, there are a number of ways that a person can be found guilty of an offence even when they did not commit the physical acts that make up the offence. A person has criminal responsibility for criminal acts that they assisted, prepared for, attempted to commit, or…
Read more…

Youth Detention (NT)
The Northern Territory has two youth detention centres, Don Dale Detention Centre in Darwin and Alice Springs Detention Centre. Government statistics reveal that the majority of young people in detention in the NT are being held on remand, with only a small minority having been sentenced to detention. The overwhelming majority of children held in…
Read more…

NTCC Reports On Youth Detention (NT)
On the 6th June 2019 the NT Children’s Commissioner Colleen Gwynne delivered her independent monitoring reports on the two youth detention centres in the Territory. The reports found numerous shortcomings in the facilities and the procedures followed when dealing with youths who were at risk, separated or in lock-down. They also found the provision of…
Read more…