The national Fair Work workplace relations system in Australia commenced on 1 July 2009. It is administered by two bodies: the Fair Work Commission and the Fair Work Ombudsman. The main piece of legislation is the Fair Work Act 2009 (Cth). 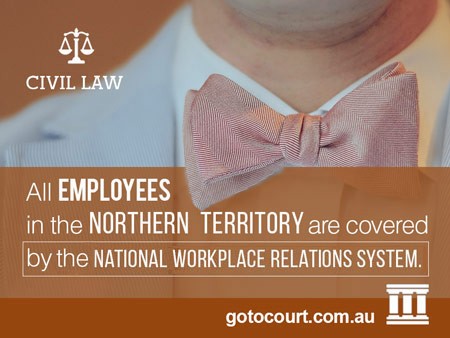 The linchpin of the national workplace relations system is the National Employment Standards. They apply to all national system employees, which includes all employees in the Northern Territory. They are a set of ten minimum employment standards, covering issues such as the maximum number of hours employees are expected to work per week, parental leave, annual leave, community service leave, paid public holidays, and termination and redundancy pay rights.

Employers are also required to give new employees a copy of the ‘Fair Work Information Statement‘. A modern award or an enterprise agreement can make certain amendments to the National Employment Standards. Some of these amendments are discussed below.

The Fair Work Act 2009 (Cth) also grants national system employees protection from their employer taking adverse action against them for exercising a workplace right. A workplace right includes the right to join a trade union or some other employer association. It also includes the right to participate in protected industrial action, which can only be taken when an enterprise agreement that is not a multi-enterprise agreement or Greenfields agreement is being negotiated.

Employees are also protected from adverse action based on discrimination against their age, race, sexual orientation and religion, amongst other things. Adverse action can include dismissing an employee, changing their job description to their detriment, or refusing to employ them. Protection is also given to employees against adverse action by a union for refusing to take part in industrial action, such as imposing a penalty on a member who refuses to take part.

It is also illegal for an employer to coerce, unduly influence, bully, or pressure an employee into doing certain things, such as making an enterprise agreement or agreeing to certain terms under a modern award, or agreeing to accept deductions in their pay based on their performance. If you are an employee and this occurs to you, or adverse action is taken against you for exercising a ‘workplace right’, you may be eligible to make a claim with the Fair Work Commission.

In addition to the National Employment Standards, employees in the Northern Territory may be subject to the terms of a modern award, which are made by the Fair Work Commission and reviewed every four years. The Fair Work Commission can only make fair and reasonable modern awards, having regards to certain matters such as relative living standards.

Modern awards set the minimum working conditions for employees in particular industries. Only certain matters can be covered by the terms of a modern award, including:

It may also set out certain ‘coverage terms’, such as which organisations are covered by the modern award.

As mentioned above, modern awards can also make amendments to the National Employment Standards. For example, a modern award can include information relating to taking or cashing out annual leave. It can also specify the period of notice to be given for terminating employment. You will not be subject to the terms of a modern award if your annual income is greater than a “high income threshold”. Currently, the threshold is $133,000 per annum.

Under the Fair Work Act 2009 (Cth), certain ‘preserved laws’ of the States and Territories still apply to national system employees in that State or Territory. This includes the Anti-Discrimination Act, and laws relating to matters such as workers compensation and long service leave.