Commercial leases relating to retail shops and some other business premises in the Northern Territory are subject to the rules in the Business Tenancies (Fair Dealings) Act (NT) (BTFD Act) and the Business Tenancies (Fair Dealings) Regulations (NT). These laws are designed to give the tenant under a retail shop lease some additional protections that do not exist under common law, which generally governs other kinds of commercial leases. If there is a clause in a retail shop lease that is inconsistent with these laws, it is overridden. 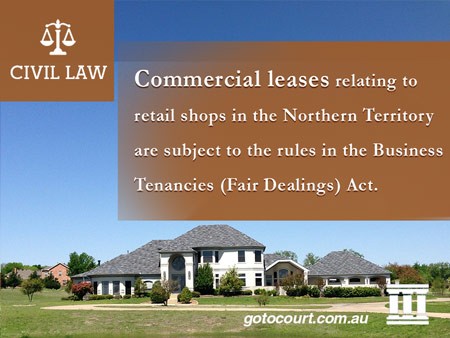 Commercial leases grant one party, being the tenant, with the right to use business premises owned by another party, being the landlord, for an agreed time. Commercial leases that do not relate to a retail shop are generally regulated by the common law, so the parties have much more leeway to agree the terms between themselves. However, there are some implied obligations which can be found in Part 8 of the Law of Property Act. For example, it is implied that the tenant must pay rent as required. It is also implied that the premises will be kept in good repair by the tenant, having regard to the original condition of the premises when the lease commenced. These implied obligations do not apply if the parties agree differently.

Some sections of the BTFD Act also apply to commercial leases generally. Specifically, Part 13 of that Act contains provisions dealing with the legal steps which must be taken for repossession of business premises, and a tenant’s right to participate in a tenants’ association. Finally, it is also important that the lease be registered if it has a term of greater than three years (see below under the heading ‘Registration’).

If you are negotiating a retail shop lease, the landlord must give you a copy of the lease as soon as those negotiations begin. If they make you an offer before you receive a copy, they commit an offence with a maximum fine of 100 penalty units (ie $14,900). The landlord must also give you a disclosure statement at least 7 days before the lease is entered into. It sets out key information about the retail shop premises and the landlord (eg if the shop is in a shopping centre, details of the centre).

The term of the retail shop lease (taking into account any options to renew or extend the lease) must be at least 5 years long.

If the retail shop is in a shopping centre, the tenant cannot be required to promote or advertise their shop. The retail shop lease can require the tenant to pay amounts to the landlord for this purpose every period, but there are detailed rules on what information must be given to the tenant and any unspent money is carried forward to later periods.

A retail shop lease cannot include a clause that is designed to prevent the rent from going down. This is called a ‘ratchet clause’.

If the landlord wants to refurbish or refit the retail shop, they must give the tenant notice and compensate them for any disturbance to their business.

Under the BTFD Act, the Commissioner of Business Tenancies is responsible for resolving retail shop disputes. When it receives an application for resolving a dispute, it will hold a conciliation conference to try and resolve it. If the landlord and tenant cannot reach a resolution at the conference, the matter is either referred to a court or an inquiry is held by the Hearing Commissioner, at which orders may require a party to, for example, pay money or do certain repairs. Appeals can be made to a local court, or, if the amount in dispute is above $10,000, the Northern Territory Supreme Court.

Pitfalls to look out for

If you are thinking of entering into a commercial lease, there are some things you should check:

Registration of the lease