The new provisions came into effect on 8 June 2016 although it will take some time for them to show up in the legislation.

Drug offences in the NT under the Act means that you could be charged for possessing, administering, supplying or manufacturing a prohibited drug. The drugs which are prohibited in the NT are listed in the schedules to the Misuse of Drugs Act.

It is also an offence if you drive with drugs in your system.

Police have the power to test drivers to see if they are driving under the influence of drugs. If police reasonably suspect that you have prohibited drugs they can search you or your car without a warrant.

For some minor drug offences, you may be dealt with using cautions or other diversionary schemes.

Under the Volatile Substance Abuse Prevention Act police officers, parents and doctors can apply to the Chief Health Officer for a treatment order for a child or adult who is misusing volatile substances.

A volatile substance includes the following:

If the police think you have been using a volatile substance, they may do one or more of the following:

It is an offence to be in possession of any illegal drugs.

Possession means having actual control of the drugs and includes:

You will not be guilty of a drug possession offence if you can demonstrate that you had no knowledge of the drugs. You must also show that there was no reason for you to believe that they were there.

If police find you with a combination of legal and illegal drugs, the quantity of the drugs for which you will be charged is calculated as if the entire mixture was the illegal drug.

The penalties for possession vary from fines up to life imprisonment depending on the type of drug you have in your possession and how much of it you have.

For possession of a commercial quantity of drug, the maximum penalty ranges from 14 to 25 years’ imprisonment.

For drugs that are in a ‘traffickable quantity,’ the penalty is 500 penalty units or imprisonment for five to seven years. If the offence was committed in a public place, the penalty ranges from seven to 14 years’ imprisonment. 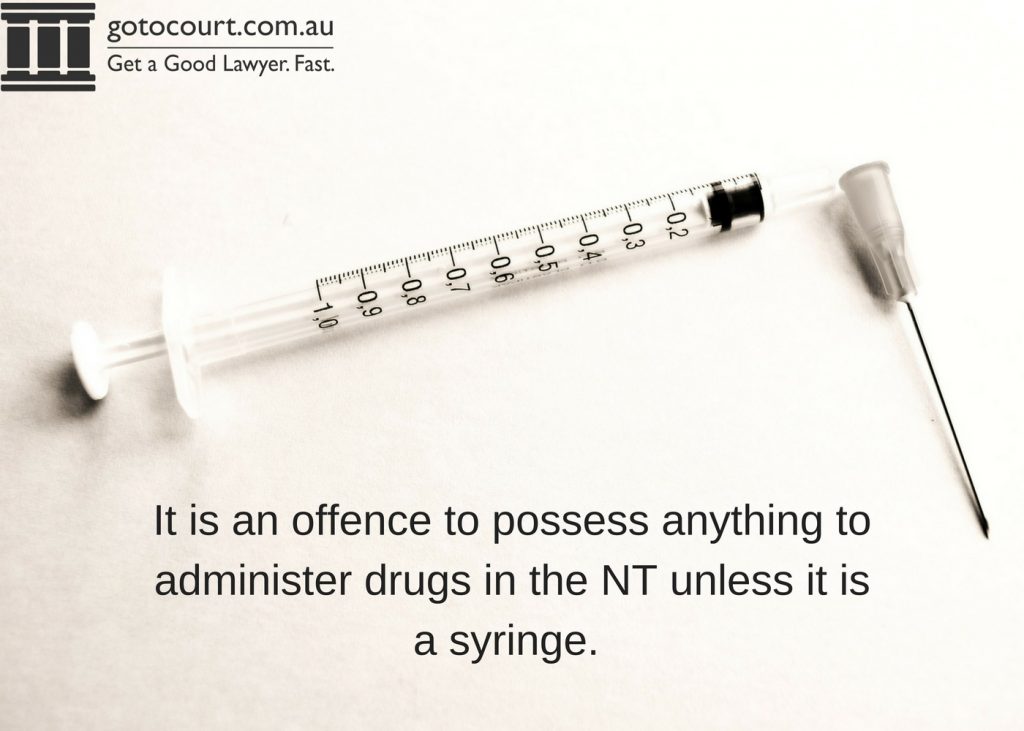 It is an offence to possess anything to administer drugs except for a syringe. Implements used for administering drugs which are prohibited include bongs and crack-pipes.

It is also an offence to let someone administer drugs to you, such as by injecting them or putting them in your mouth.

If you are convicted of one of these offences, you could face a maximum fine of 50 penalty units or six months in jail.

Prior to the May 2016 legislation amendments, fines were 17 penalty units but the jail sentence was more severe (two years’ imprisonment).

Cultivating is the gardening someone does to grow illegal plants, such as opium poppies or marijuana. Cultivating also includes gathering wild mushrooms.

It is also an offence to commit the following:

The maximum penalties for cultivation vary based on the number of prohibited plants found.

For a commercial quantity of the plant, the maximum penalty is 25 years in prison.

For a traffickable quantity of the plant, the maximum penalty is seven years in prison.

For less than the traffickable quantity, the penalty is a fine of 200 penalty units or two years’ imprisonment.

As of 8 June 2016 the maximum penalties for manufacturing drugs in NT are as follows:

Precursors are items or ingredients used to make illegal drugs. It is illegal to possess any of the following without a lawful excuse:

It is also illegal to supply a precursor to someone else.

If you are found guilty of a precursor offence, you are liable to a maximum penalty of between seven and 10 years in prison.

For drug offences in the NT, supply includes any of the following:

It is an offence to supply illegal drugs or to in any way participate in supplying them. The offence applies regardless of whether a payment is made.

If there are drugs in your possession and they are over a certain weight, it may be assumed that you intend to sell them to someone else. This is known as deemed supply of a traffickable quantity of drugs. To escape conviction, you will have to prove that you had no intent to sell them.

The maximum penalties for supply depend upon the quantity and type of the drug. The penalties range from a fine of up to 500 penalty units and up to life imprisonment.

Selling less than a commercial quantity in an indigenous community carries a maximum penalty of nine years’ imprisonment.

New Drug Offences in the NT

On 8 June 2016, several new drug offences were introduced into the NT. These new offences include:

Those convicted of drug offences in the NT where children are involved must now serve 70% of their prison sentence as a minimum.