The main legislation applying to employees who are covered by the South Australian industrial relations system is the Fair Work Act 1994 (SA), the Local Government Act 1999 and the Public Sector Act 2009. If you are any other kind of employee, you are a national system employee and covered by the Commonwealth Fair Work Act 2009. 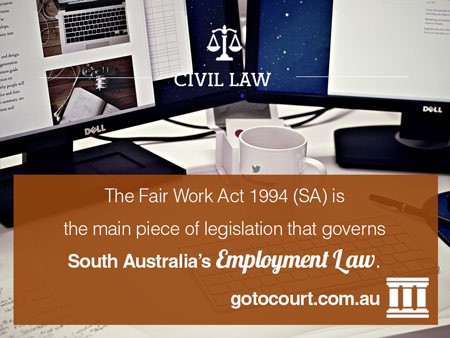 Most employees in South Australia will be covered by the Fair Work Act 2009. It is managed by two bodies; the Fair Work Commission and the Fair Work Ombudsman. The Fair Work Act 2009 (Cth) contains a set of ten minimum National Employment Standards for national system employees, which replace the five minimum standards that applied under the Australian Fair Pay and Conditions Standard. These include, for example, minimum annual leave requirements, maximum weekly working hours, redundancy pay and personal leave.

National system employees are also entitled to other protections relating to workplace rights such as taking part in protected industrial action and being protected from discrimination based on their age, race, or sexual preference amongst others. These protections generally prevent an employer from taking action against you for exercising a workplace right. Other provisions of the Fair Work Act 2009 (Cth) relate to matters such as the making of modern awards (see below), setting minimum wage rates, and unfair dismissal.

National system employees may also be covered by the terms of a modern award. Modern awards are made by the Fair Work Commission and set minimum terms and conditions for employees in particular industries. These terms and conditions are generally framed around the ten minimum National Employment Standards mentioned above. For example, a modern award can include information relating to taking or cashing out annual leave. The Fair Work Commission can only make modern awards that are fair and reasonable, taking into account factors such as relative living standards. However, you will not be covered by the terms of a modern award if your annual income is greater than a “high income threshold”. Currently, the threshold is $133,000 per annum. A comprehensive list of modern awards can be found here.

The Industrial Relations Commission has jurisdiction in relation to unfair dismissal applications, to approve of the enterprise agreements, which apply between the employer and employees of a particular enterprise, to make awards in relation to particular industries, and to set out minimum pay and conditions of employment.