Many workers in Queensland will presume that they have no legal recourse if they are harassed or bullied in the workplace, because they are not technically an employee. This is not the case; there are various laws which cover workplace bullying in Queensland which are directed not only toward employees but also to contractors, apprentices, volunteers, and people working on a commission-only basis.

All workers subjected to workplace bullying in Queensland must firstly take steps to resolve grievances internally, before considering legal action against an employer. 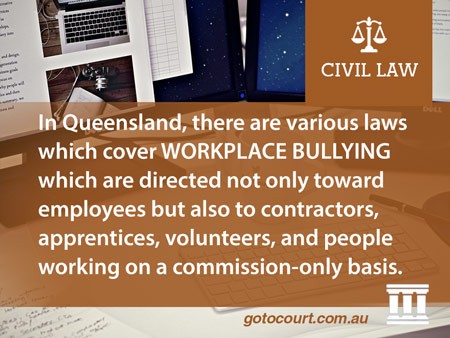 Initial steps: Lodging a grievance regarding workplace bullying in Queensland

If you believe you have been subjected to inappropriate behaviour in the workplace, you should start by making a complaint to your employer, principal, or supervisor. Many medium to large sized employers will have policies regarding dispute resolution and lodging complaints. It is important that both workers and employers consider and follow these policies when a complaint arises.

Workers employed by constitutional corporations or the Commonwealth

For those Queenslanders who are employed by a corporation (eg a ‘Pty Ltd’ company) or the Commonwealth government, they may be able to bring an application to the Fair Work Commission under section 789FF of the Fair Work Act 2009 for an order that the perpetrator stop the bullying. In order for an order to be made, the behaviour must constitute ‘bullying’ as defined under the Act; this is legislated as meaning any repeated behaviour which is directed toward an individual (or individuals) which poses a risk to safety and health.

Isolated incidents of unwelcome behaviour will not constitute bullying for the purposes of the Act; however, the definition is wide enough to encompass an extensive list of behaviours which are inappropriate or even dangerous.

Laws regarding safety and health

In 2011 Queensland adopted workplace health and safety legislation which largely reflects Commonwealth laws. This legislation is the Work Health and Safety Act 2011 and the Work Health and Safety Regulation 2011 which set out employers’ and workers’ obligations with regard to safety and health in workplaces. The general obligation on employers is that they eliminate risks or, if that is not possible, they minimise risks as far as is reasonably practicable. Part of this obligation is to ensure that workers are trained, supervised and inducted in relevant procedures.

Employers and workers who are found to have contravened these laws may be subject to prosecution for an offence. WorkSafe Queensland deals with investigations of health and safety matters, as well as workers’ compensation claims.

Compensation for injury caused by workplace bullying in Queensland

A worker who is experiencing the psychological or physical effects of being bullied in the workplace must seek medical attention. It is important to prioritise health and wellbeing. A doctor may be able to write a medical certificate for a period of leave due to stress or other injury arising from bullying. Workers must present these medical certificates to their employer if they are seeking paid leave as a consequence of bullying and harassment, and if they are to lodge a claim for workers’ compensation under the Workers Compensation and Rehabilitation Act 2003.

That Act also extends the definition of ‘worker’ beyond mere employer-employee relationships; some contractors, people who work on commission, share farmers and people employed by labour hire companies are deemed ‘workers’ under the Act. Under that Act, a compensable injury includes the aggravation of a psychological or psychiatric disorder; however, the aggravation must arise out of or in the course of the employment. Psychiatric or psychological injury arising from bullying and harassment in the workplace is therefore a compensable workplace injury.

Related claims regarding bullying and harassment

Related claims regarding bullying and harassment

In some circumstances bullying and harassment may have a sexist, racist, or religious or anti-religious motivation. If this is the case, and an employee suspects that there has been discrimination, then he or she may wish to consider bringing a discrimination claim under either Queensland or federal anti-discrimination legislation. Note that discrimination complaints must be made within 12 months of the alleged discriminatory conduct.