In Queensland, the taking of blood tests by drivers who are suspected of driving under the influence are covered by the Transport Operations (Road Use Management ) Act 1995. It is an offence to refuse a blood test or to inhibit a medical practitioner from taking the blood sample. 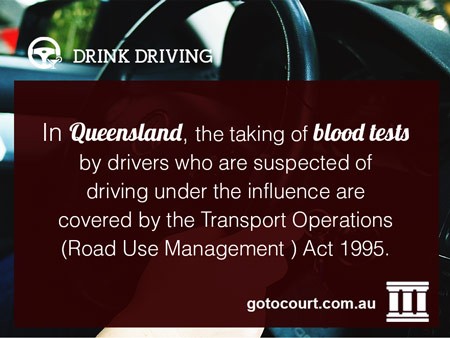 When the DUI blood sample can be taken

Any person who police suspect may have been driving or attempting to drive a vehicle in the previous 3 hours can be requested to provide a sample of breath or saliva to find out if they are or were driving under the influence of alcohol or a drug. If they refuse to do so, or if they do not give a sufficient sample for testing, then the police may request a blood sample. If a breath testing machine malfunctions or does not show a reading for drugs or alcohol, and the person appears to be affected by something, the police can request a blood sample is given instead.

If a person who is directed to provide a breath or saliva sample shows the police a doctor’s certificate that says they are medically or physically unable to provide one then the police must direct them to provide a blood sample instead.

Police can also require a blood test from a person who has been arrested for an offence to do with their manner of driving, or for a vehicle offence involving alcohol or drugs or for any indictable offence that has some connection to driving. A blood sample may be taken from a person who is unconscious or otherwise unable to communicate.

A sample will not be taken if the treating doctor or nurse believes that taking the blood sample would prejudice the person’s treatment. They may also refuse to take one if they have another reasonable excuse. A person has no right to request a blood test instead of another test.

How a DUI blood sample is taken

Any person may be held for a reasonable time for a blood sample to be taken. It may be taken at the police station, or at a hospital or healthcare facility. Two samples are taken. The first sample is given to the police for analysis and the second to the driver. The police will arrange for the testing of their sample. The person may have their sample tested.

If a person is required to provide a sample of blood for testing they are taken not to have done so unless it is sufficient for the test or the analysis to be carried out. They must allow a doctor or nurse, or a qualified assistant to take the sample and must do so when and as directed by and to the satisfaction of the healthcare professional. If they fail to give a specimen sample (breath or blood), their license will be suspended until after the matter is dealt with by the court. There is no appeal or review of that suspension.

Section 80(11)(c) of the Transport Operations (Road Use Management) Act, refusing a blood test is an offence for which the same penalties are prescribed as for driving under the influence. For a first offence, the maximum penalty is a fine of $3,187.80 or 9 months’ jail. If it is a second conviction within 5 years (the first conviction being for either refusing a blood test, driving under the influence or for a serious driving offence) the maximum penalty is $6,831.00 or 18 months’ jail.

A blood sample reading may be challenged on a few grounds. Firstly, the driver can have their sample analysed. To be able to rely on the result all of the requirements for testing must be complied with. The accuracy of the police sample may also be challenged if all of the requirements for the transmission and testing of the sample were not properly complied with. It is a defence to the charge of refusing to provide a blood sample if the request to provide the specimen was not lawfully made. It is also a defence if a sample could not be provided because of events that occurred that meant the driver was incapable of providing the specimen. It will also be a defence if the court accepts that there was some other good reason for the person’s failure to provide the specimen.

If You’re Going to Argue with Police on Video, Make Sure You Are Right
Go To Court’s Legal Hotline received a large number of phone calls from the public asking about the legality of refusing a breath test in Queensland. From our investigations, these questions were prompted by a viral YouTube video. In the video a man, presumably the Youtube uploader, repeatedly asked a police officer conducting a random…
Read more…

UPDATE: QLD MP Billy Gordon Convicted of Drink Driving
On 2 June 2016 we reported on charges laid against Queensland Member of Parliament Billy Gordon relating to drink driving and unlicensed driving. Mr Gordon was driving from Kuranda to Cairns when he was pulled over for a random breath test. He reportedly recorded a blood alcohol content reading of 0.094 – almost twice the…
Read more…

Queensland MP Charged With Drink Driving and Driving Unlicensed
A charge of drink driving has reportedly been laid against a Queensland Member of Parliament after police stopped him for a random breath test on Wednesday night. It was claimed that Billy Gordon, the Member for Cook, had been watching the State of Origin match in Kuranda and was driving back to Cairns along the…
Read more…

DUI Record Set in Queensland
Authorities were left dumbfounded after a Gold Coast woman found behind the wheel of her car recorded a breath alcohol reading of 0.48 – almost 10 times the legal limit. Paramedics found the woman passed out in her car outside a Runaway Bay cafe. She was transport to Gold Coast University Hospital where blood tests confirmed…
Read more…