There are three different types of drink driving offences in South Australia: exceeding the prescribed concentration of alcohol (PCA), driving under the influence (DUI), and refusing to provide a breath/blood sample. The most serious is driving under the influence (DUI), as this means you were so intoxicated that you could not control the vehicle. This offence is not necessarily based on your PCA but through the police observing your behaviour. Factors are based on your physical, and mental faculty, and whether it is lost, or impaired. This can include lack of control of the vehicle, slurred speech, swaying when standing, or a strong smell of alcohol on your breath.

You can also be charged with DUI, and exceeding PCA, especially if you were involved in an accident. You cannot be convicted of both if it relates to the same incident. Being charged with driving over the limit (exceed PCA) is the most common drink driving offence. This offence is not based on whether you feel intoxicated, or how you drive. It is purely based on your PCA reading. 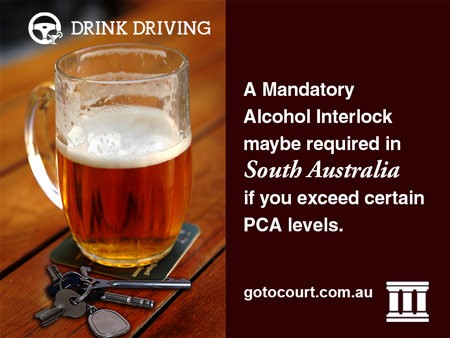 Penalties for drink driving in SA

The Road Traffic Act 1961 is the legislation that governs drink, and drug, driving offences in South Australia. This Act outlines the prescribed alcohol limits, the penalties, and the procedures that must be followed. All drink driving offences will incur a loss of demerit points, which differs depending on your PCA. Normally for first time offenders with a reading of .05 to .079 the police will issue an on the spot fine, and if paid, no licence disqualification will be incurred. This also applies to first time drug driving offences. If the matter goes to court you will receive a 3 months disqualification. For PCA levels of .08 to .149 you will receive an automatic 6 months suspension. For PCA levels of .15 or greater you will receive an immediate suspension for 12 months. DUI and refusing a breath test will also incur an immediate suspension of 12 months.

For all readings great than 0.79 you will also be given a summons to appear in court for the magistrate to determine your actual penalty, which may be increased depending on where your PCA reading falls within the category. Higher penalties will apply for repeat offenders. For those who have had two or more drink, or drug driving, offences within 3 years will be assessed for alcoholism, or drug addiction. A Magistrate may order that you are disqualified until you receive treatment. You will then have to apply to the court for a further assessment before you will be eligible to obtain your licence. If your licence is disqualified you will have to hold a probationary licence for 12 months, and have a zero alcohol limit.

The Mandatory Alcohol Interlock Scheme in South Australia applies to those that have been charged with a second PCA offence with a reading 0.08 or greater, first offence PCA with a reading of 0.015 or greater, refuse breath or blood test, or DUI. After you have served your disqualification period you will have to have an alcohol interlock fitted to your car for the same length of time as your disqualification. A report is done on your interlock advice, which shows any failed attempts. If you have incidents recorded by the interlock, in which you attempted to drive the car with alcohol on your breath, the period of time you need to have the device may be increased. Costs for the interlock must be paid by you. These are approximately $400 for installation, $180 annual administration fee, $160 for rental and service of the device, and $150 to have it removed.

The South Australian Police have the ability to do random roadside saliva testing. The test can detect THC, Methylamphetamine, and MDMA in your saliva. There is no minimum level so any amount found is an offence. As with with drink driving, it is an offence to refuse a test and refusal can result in harsher penalties. Even though the saliva test doesn’t read all types of drugs, you can still be charged with driving under the influence of drugs no matter what the drug. It is important to note that the saliva test cannot be used to obtain a DNA sample, nor can it be used in regard to any other offence.