Breach of Bail in South Australia

In South Australia, an application for bail is governed by the Bail Act 1985. If you are granted bail you will have to sign a bail agreement. This is an undertaking or promise that you will come to every court date that you are required to and to comply with any other conditions that are in the agreement. The bail agreement and the guarantees don’t end until the matter that bail was granted for is finalised. If you commit a breach of bail in South Australia, without having an excuse acceptable to the court, you are guilty of an offence. If a court believes that you have broken a condition of your bail, it can revoke (cancel) your bail and issue a warrant for your arrest. However, if the police find out that you have breached your bail, or that you are intending to abscond you can be arrested without a warrant and taken before the court. 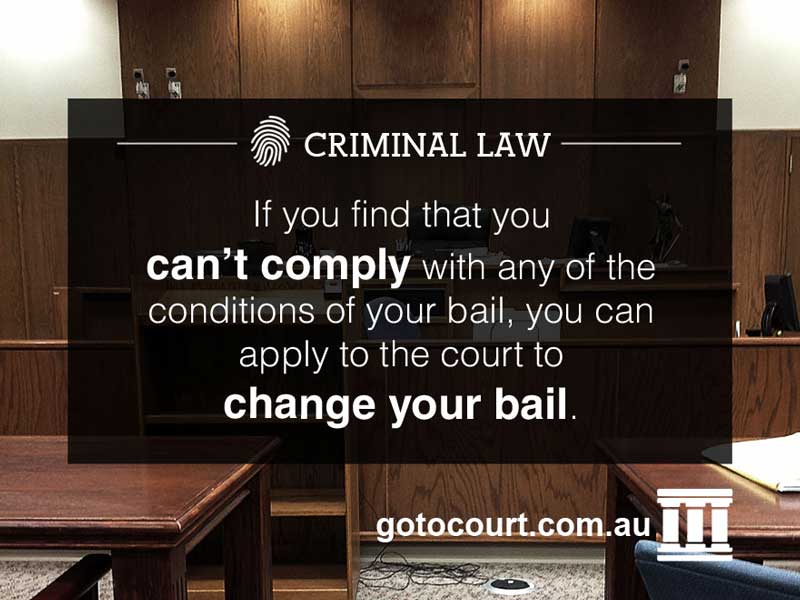 If at any time you find that you are can’t comply with all of the conditions of your bail, you can apply to the court to vary (change) your bail. Your matter can be bought forward to an earlier court listing day if you need to make your application quickly.  You need to complete an Application to vary or revoke a condition of bail and lodge it at the court. The application form is available from the court registry or online at the South Australian Magistrates Court website. You must continue to comply with all of the conditions of your bail until such time as the variation is approved.If you fail to appear in court on a date that you are required to then a First Instance Warrant for your arrest can be ordered by the court. If a warrant is issued it is in your best interests to go as soon as possible to the police station and ask to be taken before a court to explain why you did not attend. You can make a fresh application for bail when you are at court. You should take with you any medical certificates or other evidence that you want to rely on to explain why you did not come to court. It will be more difficult for you to be granted bail in the future if you have a history of breaching your bail.The maximum penalty that the court can give you for breaching your bail in a fine of $10,000 or 2 years in prison. The penalty that the court gives for breaching the bail cannot be more than the maximum penalty that it could give for the most serious offence for which you are on bail. The penalty for the breach of bail is in addition to any penalty that you receive for the original offence and any order made to forfeit a sum of money that may have been specified in your bail agreement.

If you are a guarantor in a bail agreement and you find out, or your suspect that, the person you guaranteed under the bail agreement has failed to comply with a term or condition of the agreement, you must tell the police immediately or you could be given a maximum fine of up to $1,250.An order can be made to forfeit money that was promised or lodged under your bail agreement if you have breached that agreement. It can be made whether or not you are charged with breaching your bail. If an order is made it means that you and any person who guaranteed you under the bail agreement will have to forfeit the amount of money that is set out in that guarantee. These orders are called estreatment orders.

The person against whom it has been made (you or your guarantor) can ask the court to either reduce the amount that you have to forfeit or that the estreatment order is rescinded (cancelled). The court can also make an order that allows time to pay the amount, or allows it to be paid by instalments. If the amount is not paid, it can be recovered by the court as a fine.