There are many firearms offences in SA (South Australia), some of which carry severe penalties.

To possess, own or use a firearm anywhere in the state, you have to have obtained a licence and your firearm must have been registered. Eligibility for a licence is set out in the Firearms Act 1977 and includes: 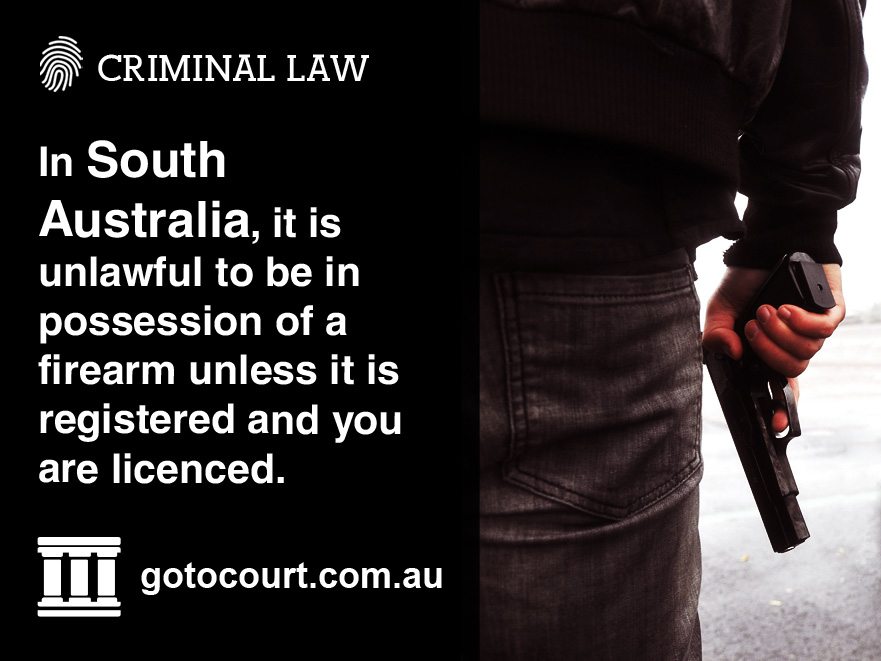 You must be over 18 years old to obtain a licence, or at least 15 years if you are directly involved in farming. You must have the licence with you whenever you have a firearm in your possession. The greatest penalty that can be imposed if you don’t is $5,000.

To obtain a licence, you must be ‘fit and proper’, which means:

Doctors and firearms clubs must inform the Registrar if they believe you have a physical or mental illness or pose a threat to anyone’s safety. Clubs must expel you if your behaviour threatens anyone’s safety or if a prohibition order relating to firearms applies.A number of firearms offences in SA relate to registration and storage of firearms.

It’s an offence to possess unregistered firearms. The maximum penalty:

Firearms must be kept securely. The maximum penalty for failing to do so is $2,500. They must be:

Ammunition must be stored separately to any firearms in their own locked container.Firearms offences in SA relating to possession include simply having a firearm in your home or in a vehicle.

Firearms are grouped into 5 categories according to their dangerousness. An imitation firearm is considered to be a firearm of whatever class it resembles.

It’s an offence to possess silencers, certain parts of firearms, and firearm accessories. The maximum penalty is a $75,000 fine or 15 years in prison if the prohibited accessory is actually fitted to the firearm.Firearms which are prescribed firearms under the legislation are:

A serving member of the police force can issue an interim order, which lasts for 28 days, if they hold a reasonable suspicion that you:

The Police Commissioner can issue an order if:

You can be detained for as long as 2 hours to allow time for the order to be prepared and served. You will be disqualified from obtaining or holding any firearms-related permit or licence, and from having or using firearms, parts of firearms, or ammunition. All firearms must be surrendered and you can’t live in any place at which firearms are stored or used. You must tell each adult at the place where you live that you are subject to a court order prohibiting you from doing so. If you don’t, you can be penalised up to $10,000 or 2 years in prison.The penalty which will apply for a breach of a prohibition order depends upon the way in which it was breached.

The maximum penalty for acquisition, use or possession is:

For failing to surrender a firearm, parts of firearms, or ammunition, the maximum penalty is:

Living at a place where firearms are present, or where there are parts or ammunition, results in a maximum penalty of:

In relation to firearms offences in SA, the police can:

Obstructing or resisting any police officer exercising any such powers carries a maximum penalty of $10,000 or up to 2 years in prison.It’s an offence in SA to discharge or fire a firearm:

This article reflects the state of the law as at 29 April 2016. It is intended to be of a general nature only and does not constitute legal advice. If you require legal assistance, please telephone 1300 636 846 or request a consultation at gotocourt.wpengine.com.