You can challenge a will in South Australia on a number of grounds, which are found in the Wills Act 1936 ,  the Inheritance (Family Provision) Act 1972, and also under the common law.  The grounds for challenging the validity of the Will include: that the will-maker (testator) lacked testamentary capacity when making the Will (for example, due to dementia); that the testator was coerced or under duress; or that the Will is fraudulent.  Challenging a Will on the basis that the testator failed to make adequate provision for a beneficiary is made pursuant to the Inheritance (Family Provision) Act 1972. 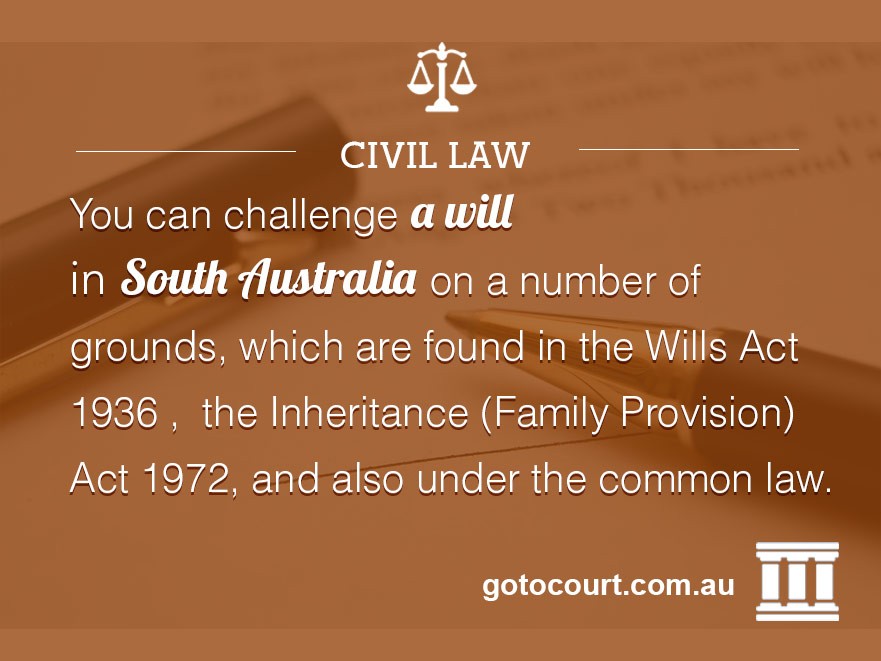 In South Australia you must satisfy a number of requirements in order to be valid. If a Will does not satisfy these requirements, then it may be invalid (subject to the Supreme Courts power to treat an invalid or informal Will as valid). The will-maker lacking testamentary capacity is one of the main grounds for challenging the validity of a Will. Any person can apply with the permission of the Supreme Court for an order revoking the Will of a person lacking testamentary capacity.

The Supreme Court will only make an order revoking the will if it is satisfied the testator would have likely intended to do the same if they could have done so. It must take into account a number of things in reaching this conclusion, including any evidence of the testators wishes, the interests of beneficiaries under the will and the size of the testators estate. The rules of evidence do not apply to proceedings for the making of such an order, but only certain people can appear and be heard at the proceedings, including the testators guardian, administrator or legal representative, and any other person the Supreme Court thinks has a valid interest in the proceedings.

Rectification of a Will

The Supreme Court has a specific power under the Wills Act 1936 (SA) to rectify a Will that does not express the intentions of the testator. An order for rectification can only be sought within 6 months of the executor of the estate being granted probate, or letters of administration being granted. Unlike the other States and Territories, the Supreme Court cannot extend this time limit.

Challenging a Will after the testators death

Challenging a Will by claiming further provision from the Estate

Civil Law, SAChallenging A Will