Because SACAT is very new, not all of its intended functions have started operation and this initial period for the tribunal will be one where the efficiency and effectiveness will be tested. 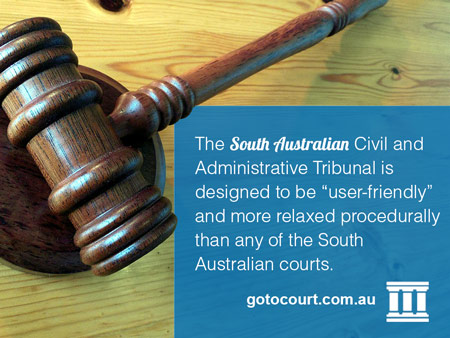 Many of the other Australian States and territories have amalgamated tribunals, with an aim of creating a streamlined process for the resolution of specific civil and administrative disputes.  Having a “super tribunal” can be more efficient, more cost-effective, and easier to understand.

As with most other tribunals in the other States and Territories, SACAT is designed to be “user-friendly” and more relaxed procedurally than any of the South Australian courts.  These objectives are specifically stated at section 8 of the SACAT Act; namely, that the tribunal is to aim for natural justice, accountability and transparency, and is to act with as little technicality and formality as possible.  If a matter proceeds to a hearing, SACAT is not required to observe the usual rules as to evidence and can be flexible in the manner in which it is to conduct proceedings.

Unlike most Courts, which has either Judges or Magistrates, a tribunal is constituted of members, and has a President and Deputy President instead of a Chief Judge or Chief Magistrate.  The President of SACAT is appointed for a term of five years and is also a Judge of the Supreme Court of South Australia.  Under section 11 of the SACAT Act the President has a number of leadership and administrative functions, including giving directions about the proper processes and procedures for the tribunal, overseeing the administration of the tribunal, and acting as a tribunal member in relation to matters which come before the tribunal.  A Deputy President is also appointed for a term of 5 years and is given the power to assist the President with his or her functions.  The first President of SACAT is Justice Greg Parker of the Supreme Court of South Australia and the Deputy President is Judge Sue Cole.

The SACAT Act allows for the tribunal’s procedures to be quite flexible and informal.  The Act specifically empowers the tribunal to obtain evidence of its own volition by ordering a party to produce documents or give evidence on oath.  It also allows tribunal members to order that an expert witness give evidence, where he or she considers it appropriate, and to enter and inspect a building which is the subject of a dispute.

SACAT members are given extensive power to give orders at any time, if they consider it necessary and in the interests of a just and speedy resolution of the matter.  Most matters before SACAT will also proceed to mediation or conciliation, prior to proceeding to a hearing, so that the parties have an opportunity to resolve the matter informally and with as little cost as possible.

Parties are entitled to be represented by a lawyer at a hearing, however each party bears his or her own costs, unless SACAT otherwise orders or unless the enabling legislation allows it.  One party may be ordered to pay another’s costs where he or she has conducted the litigation capriciously or has caused delays.