Most of the States and Territories have established “super tribunals” for dealing with complaints about decisions made by government departments and government officials.  South Australia’s super tribunal, called the South Australian Civil and Administrative Tribunal (the “Tribunal”), commenced operating on 30 March 2015.  One of its main roles is reviewing decisions made by the government on their merits and deciding whether the decision made was the right decision.  This is called “merits review”.  Government decisions may also be reviewed by the South Australian Supreme Court to check whether the decision made was lawful.  This is called “judicial review”. 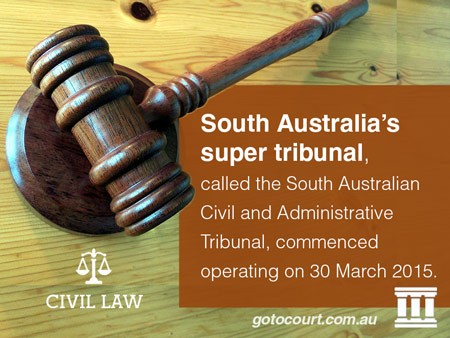 The Tribunal was established pursuant to the South Australian Civil and Administrative Tribunal Act 2013 (SA)and associated regulations.  It will cover a large number of legal issues that were previously dealt with by separate tribunals.  It has a number of objectives, which include being accessible and low-cost, and acting independently and expeditiously.  It has two kinds of jurisdiction. In its “original jurisdiction” it makes decisions under the authority of other enabling legislation.  This jurisdiction includes, for example, some kinds of residential tenancy disputes.  In its “review jurisdiction”, it looks at and reviews decisions that have previously been made by government officials on their merits and decides whether changes to the decision should be made.

Hearings held by the Tribunal are usually held in public and not behind closed doors.  The Tribunal does not need to comply with South Australia’s evidence laws, so proceedings are more informal than those that are held in a court.  However, a legal practitioner can represent you depending on the nature of the dispute.  At the hearing, the Tribunal decides whether the correct and preferable decision was made by the original decision-maker, without being too concerned with the legal technicalities.  If a question of law arises in the hearing, it may be referred to the Supreme Court.  Therefore, the Tribunal has the power to make a number of different orders, including affirming the decision, replacing it or making amendments to it.  The Tribunal will usually first encourage the parties to negotiate a compromise, which can involve requiring them to attend a compulsory conference or mediation which is supervised by a person chosen by the Tribunal itself.  An online application form must be filled out to initiate the dispute resolution procedures of the Tribunal.

Merits review decisions made by the Tribunal cannot be appealed to its Appeal Panel.  However, they can be appealed to the Supreme Court of South Australia, provided you make an application for review to them within one month of the decision of the Tribunal.  This is significantly different from most other jurisdictions, where you can only appeal a decision on a question of law.

South Australia has not codified the law dealing with judicial review and how it is undertaken.  Instead, the rules and traditions of the common law as they have been developed by the courts apply.  There are a number of grounds why a decision may not be lawfully made; for example, the official making the decision may not have had the authority to make the decision, they may have made a legal error, they may have had an improper purpose when it was made, or they may have taken into account information that was irrelevant to their decision.  There are numerous kinds of orders that can be made on a judicial review: for example, a court may issue an injunction, issue a writ of mandamus (which requires somebody to perform a duty they have not performed) or set aside the original decision (known as an order of certiorari).

Proceedings for judicial review are brought in the South Australian Supreme Court in accordance with the Supreme Court Civil Rules 2006.  Applications must be made within 6 months of the decision to be reviewed.  A number of forms need to be lodged including a Summons and an Affidavit, amongst others.  You should seek legal advice before applying for judicial review.