Drink driving laws in the ACT are similar to those of other States, but there are differences. These differences lie in the length of suspension, being able to apply for a restrictive licence, and the course required to be completed to regain your licence. There are two prescribed concentration limits for drivers, which will determine your legal alcohol limit.

The first is classed as ‘special’ drivers who are required to have a zero alcohol limit. The second is for all other drivers who must have a legal alcohol limit of under 0.05. Special drivers include holding a foreign drivers licence not issued by a recognised country; holding a learners licence, probationary licence or provisional licence; driving a vehicle on which a sign is required to be displayed under the Dangerous Goods Act; driving a vehicle with a GVM of more than 15 tonne; driving a public passenger vehicle; or driving as a driving instructor with a learner in the vehicle. 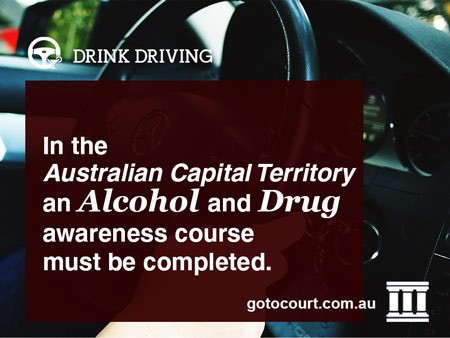 Penalties for DUI in the ACT

Penalties for drink driving in the ACT can include fines, suspensions, and imprisonment. The type of penalty that will be imposed by the Court will depend on your licence class, your BAC reading after your breath test, and your past traffic history. It is important to note that in the ACT a repeat offender means anyone convicted for drink driving previously no matter how long ago that conviction was. The ACT has divided their drink driving penalties into four levels. Level one relates to special drivers with a BAC of more than 0.00 but less than 0.05; this can incur a disqualification period 1 to 3 months. Level two is 0.05 to .079; with a disqualification period of 2 to 6 months. Level three is .08 to .149; with a disqualification period of 3 to 12 months. Level 4 is 0.15 or more; with a disqualification period of 6 months to 3 years. If you are found guilty of a level 3, or 4, DUI offence you can also receive a term of imprisonment of between 6 to 12 months. If your reading is over 0.10 the police will also immediately suspend your licence. If you are a special driver the police will immediately suspend your licence if your reading is greater than 0.05.

Restrictive Licences in the ACT

The ACT allows those that have been convicted of drink driving to apply for a restrictive licence allowing them to drive in limited circumstances. To apply you will need to complete an application, and affidavit in support, and file it in the Magistrates Court. You will also have to serve a copy on the AFP, and the RTA. To be eligible to apply you must reside in the ACT, have a blood alcohol reading of less than 0.10 (if you are a special driver and your blood alcohol reading must be less than 0.05), your licence is not currently suspended due to demerit points, and it is your first offence. You will also have to show the Courts that exceptional circumstances exist which justify you requiring a driver’s licence. Exceptional circumstances may include the need to take a family member to regular hospital appointments, or you need your licence to perform your job. Evidence of your situation needs to be provided such as certificate from the Doctor, or a statement from your employer.

If you have been convicted of drink driving in the ACT, at the end of your disqualification period you will need to complete an alcohol and drug awareness course. If you have applied for a restrictive licence you will also have to complete the course before one will be issued. There are two different courses depending on your BAC level. The first is the standard course and second is the extended course for repeat offenders, and those with a BAC greater than 0.15.

DUI Legislation in the ACT

The main legislation that governs drink and drug driving in the ACT is the Road Transport (Alcohol and Drugs) Act 1977. This legislation outlines the alcohol or drug screening process, the special drivers category, the type of offences, the minimum and maximum penalties that must be imposed by the Court, the evidence the police will use for noncompliance, evidentiary certificates required showing the level of your BAC or blood sample, and also outlines the police powers to direct you not to drive.