Restraints of trade in Queensland are clauses in a written contract which purport to restrict one of the contracting party’s ability to trade. They are most commonly found in employment contracts for professionals or skilled tradespeople who may work closely with the employer’s clients or will have access to trade secrets and other confidential information. Restraints of trade in Queensland are also commonly found in sale of business contracts, restricting the seller from setting up in competition with the purchaser of the business. 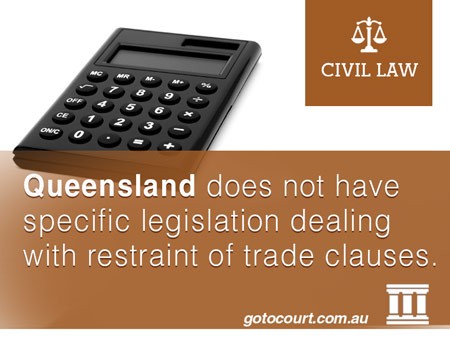 General principles of restraints of trade

Restraint of trade clauses are presumed to be void for public policy reasons, unless the party who is seeking to rely on the clause can demonstrate that it is reasonable, having regard to the particular circumstances. The onus of establishing that the restraint is reasonable (and therefore valid) rests on the party who is seeking to enforce the restraint. That party must demonstrate that the restraint is necessary to protect its legitimate business interests, and that it goes no further than is necessary to afford that protection.

What is reasonable protection will depend on a number of factors including (in the example of an ex-employee):

How restraint of trade clauses operate

The burden is always on the party who seeks to rely on the restraint of trade clause to prove that it is reasonable in order to protect its interests.

Legislation regarding restraints of trade

Queensland does not have specific legislation regarding restraint of trade clauses, unlike New South Wales. However, some provisions of the Competition and Consumer Act 2010 apply to prohibit restrictive trade practices. Employment contracts, partnership agreements and some sale of business contracts are excepted from these laws.

Typically, if a contract contains a restraint of trade clause it will also state that the remedies for breach of the clause include that the party affected by the breach may seek an injunction, along with any other remedies such as compensation for damages caused by the breach.

Injunctions are usually obtained through commencing urgent proceedings in the Supreme Court of Queensland  and can be obtained prior to a final hearing on the issue of whether or not a restraint of trade has been breached. These kinds of injunctions are known as ‘interlocutory injunctions’.

Compensation for breach may be quantifiable by reference to the loss of business caused to the party seeking to enforce the restraint.
Civil Law, QLDRestraint Of Trade