This Act does not apply to employees of NSW government agencies; for example, the State public service or the local councils. They remain covered by the NSW Industrial Relations Act 1996 (IR Act).

There are, however, some aspects of employment law in New South Wales that are subject to other NSW laws, including the occupational health and safety laws, workers compensation laws and some laws that deal with specific leave provisions such as long service leave. 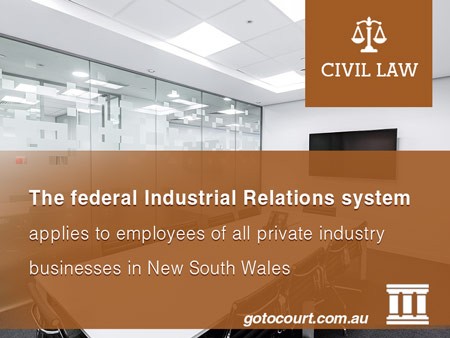 The FW Act is managed by two bodies – the Fair Work Commission and the Fair Work Ombudsman. The Act is designed to ensure that there is a safety net of minimum entitlements for workers (the National Employment Standards or NES), to enable flexible working arrangements and fairness to everyone at work. It aims to prevent discrimination against employees, and has procedures to deal with complaints about unfair dismissals from employment.

The FW Act governs the making of modern awards. These modern awards are made by the Fair Work Commission and set minimum terms and conditions for employees in particular industries and occupations.  The FW Act also allows for the making of enterprise agreements between one or several businesses and their employees, which override the provisions of the modern award but must pass a ‘better off overall’ test.

The IR Act only applies to employees in the New South Wales State or local government sector. Under the IR Act, the Industrial Relations Commission has the function of setting minimum wage rates and other conditions of employment for employees and resolving industrial disputes. The Commission can also hear other industrial matters such as claims for unfair dismissal from employment, unfair contracts and victimisation or bullying.

Persons employed by the government are most likely to be covered by a State award which will set out their employment terms and conditions. These awards will override the legislated minimums under the IR Act, but only if the award provisions are more favourable to the employee. Public servants should also refer to the Government Sector Employment Act 2013 for matters relating to their employment.

The Industrial Relations (Child Employment) Act 2006 protects a person under 18 years of age by guaranteeing them employment terms and conditions at least equivalent to those applying under the comparable NSW award.

Not all of the rights and obligations of employers to employees will apply to contractors. Under the Independent Contractors Act 2006, the Federal Court of Australia and the Federal Circuit Court of Australia have jurisdiction in circumstances where the services contract is unfair, harsh, unconscionable, against the public interest or designed to avoid certain provisions of the FW Act.

The laws prohibiting sexual harassment apply to all volunteers and contractors. An independent contractor may be covered for work injuries by workers compensation insurance but volunteers will usually not be.

Other legislation relating to workplaces

Various other New South Wales laws apply to workplaces.  The Work Health and Safety Act 2011 sets out the framework to ensure the health, safety and welfare of persons while they are working. The Workers Compensation Act 1987 provides for the compensation and rehabilitation of workers in respect of work related illnesses or injuries.

Under the Public Holidays Act 2010, a special day can be declared to be observed generally as a public holiday or half-holiday throughout New South Wales which confers a right of paid absence (or penalty rates in lieu) for the day. Employees are guaranteed paid annual leave under the  Annual Holidays Act 1944, which also prohibits parties from contracting out of some of those provisions. The Long Service Leave Act 1955 ensures that all full-time, part-time and casual workers are entitled to be paid long service leave after working for an unbroken period of ten years with an employer.