Employees, commission agents, contractors and partners within a partnership will all be protected from workplace discrimination in NSW by the Anti-Discrimination Act 1977.

Many employees in the private sector will also be covered by the Fair Work Act 2009 and will therefore be able to bring a complaint to the Fair Work Commission if they are discriminated against. 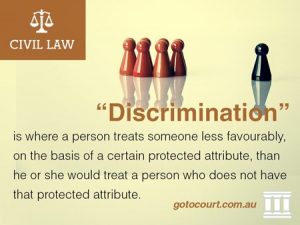 The Anti-Discrimination Act 1977 makes discrimination unlawful toward job applicants and employees, commission agents and contract workers. The Act states that if certain actions are done for two or more reasons, and one of those reasons is discriminatory, then the action still contravenes the Act and is unlawful.

The Act has more extensive anti-vilification provisions than legislation in other States and Territories. It prohibits:

Vilification is a public act which is done to incite hatred toward a particular group. ‘Public acts’ includes the dissemination and distribution of materials which are likely to cause hatred (and therefore can extend to work emails or memos), and can include wearing clothing with insignias or emblems which might be offensive.

The Anti-Discrimination Board of New South Wales

The Anti-Discrimination Board of New South Wales is established under Part 8 of the Anti-Discrimination Act 1977.  Complaints can be made to the President of the Board via the website, by written complaint or by telephone on 1800 670 812. Prior to instigating a complaint with the Board, an aggrieved person ought to lodge an internal grievance with their employer or principal. Many complaints can be resolved through internal human resources action, rather than resorting to the Board.

Once the President receives a complaint, he or she may accept the complaint or reject it.  Complaints must be brought to the Board within one year of the alleged contravention of the Act, or the complaint may be dismissed or rejected. Vilification complaints can only be made by a person who has, or claims to have, the characteristic which was the subject of the vilification. The President has the power to refer vilification complaints to the Department of the Attorney-General for prosecution of a criminal offence.

In many situations, conciliation will resolve a complaint and it will be settled by way of a Deed. Alternatively, a complaint may be abandoned or withdrawn.

The President may decline a complaint if it appears it is misconceived, will likely not succeed at a hearing, is vexatious, or that it should be dealt with by another body. He or she may also decline a representative complaint if he or she is not satisfied that the person acting as a representative is acting in the represented person’s best interests. In all of these cases, the complainant may within 21 days of receiving notice of the complaint being declined request that the President refer the matter to the New South Wales Civil and Administrative Tribunal (NCAT) for a hearing.

The NCAT has an Administrative and Equal Opportunity stream which deals with discrimination matters. It may dismiss a complaint for the same reasons as the President of the Board is empowered to, it may amend a complaint at any time, and it may make interim orders preserving the status quo of the parties until such time as the matter is finally determined.

If it finds that unlawful conduct has occurred, NCAT may:

Other laws applying to workplace discrimination in NSW

Federal anti-discrimination laws apply to all employees in New South Wales, with the exception of State and local government employees. Private sector employees will be covered by the provisions of the Fair Work Act 2009 and should therefore bring a complaint to the Fair Work Commission within 21 days of termination of employment, if the discrimination has resulted in a dismissal.