The Queensland government provides some useful information about the laws on Power of Attorney on their website.

Under the Act, a person (the principal) may authorise one or more persons (the attorney) to do for them anything that can lawfully be done by the principal. The principal may state in the documents when and on what occasions the power is exercisable.

General powers of attorney are usually used for short term purposes, such as the principal going overseas for an extended holiday and leaving a power of attorney to ensure decisions can be made on the principal’s behalf.

A power of attorney must be in the approved form which can be accessed online. The document must be signed by or with the authorisation of the principal and the principal must be present.

When an attorney undertakes their duty, they must have proof of their power of attorney. This can be done by having a copy signed by the principal, a lawyer, a justice of the peace, a commissioner of declarations, a notary public or any other professional as defined under the Act. Once all pages of the document have been certified, the attorney may use it as their authority.

Powers of attorney and their instruments revoking the power of attorney can be registered. You can find more about this here. 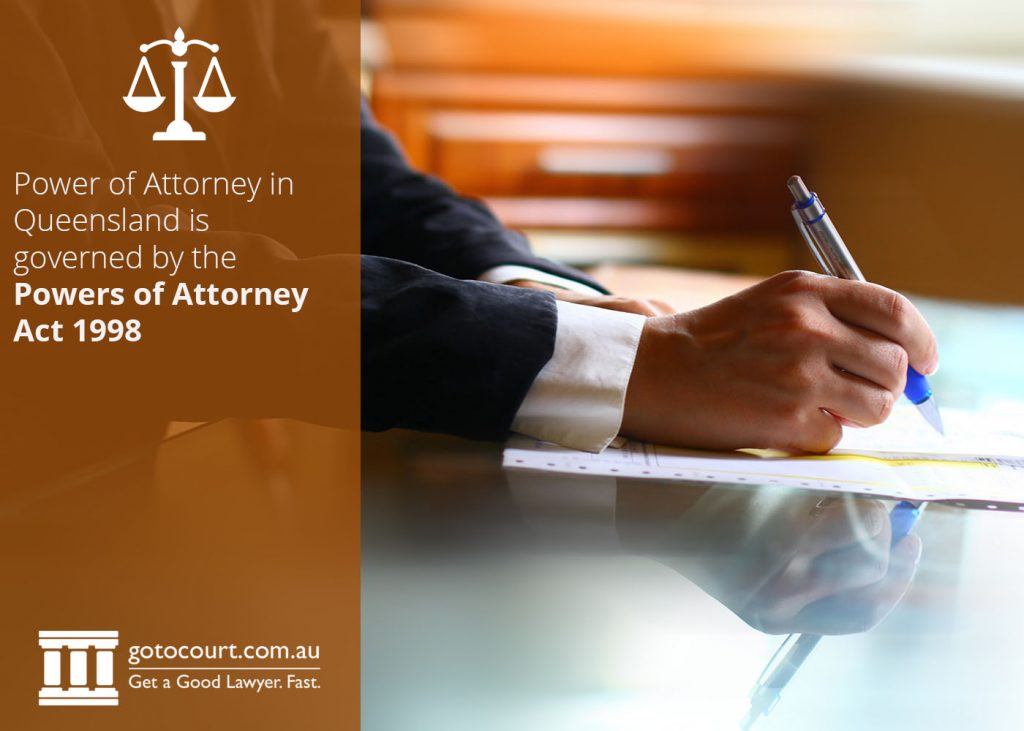 Revocation of a general power of attorney

A general power of attorney can be revoked in a number of circumstances. These include the following:

According to the Act and for the purpose of an enduring power of attorney in Queensland, an attorney must be:

An attorney can also be the public trustee, a trustee company, or for personal, non-financial matters, the public guardian.

An enduring power of attorney allows the principal to authorise the attorney to do anything regarding their financial or personal matters that the principal could lawfully do themselves. It also provides terms or information about exercising the power and will not be revoked if the principal obtains impaired capacity.

An attorney must exercise their power according to the enduring power of attorney document. The document may specify which circumstances and occasions a power for a financial matter is exercisable. However, when the documents do not specify when and how the power should be used, then the power becomes generally exercisable on the discretion of the attorney once the enduring power of attorney is made.

Enduring powers of attorney can also be registered.

The principal may give directions about current or future health matters, including care, and appoint one or more attorneys to exercise power for a health matter. This is called an advance health directive or AHD.

An advance health directive is not revoked as a consequence of the incapacity of the principal and it takes precedence over other general health aspects of an enduring power of attorney.

An advance health directive operates when the principal has impaired capacity. It works as if the principal gave that direction or had capacity to make that decision.

As advance health directives have a significant impact on an impaired person’s health, there are specific rules under section 36 of the Act which limit when life sustaining measures can be withheld or withdrawn.

An attorney’s power under the directive is exercisable during any or every period the principal has impaired capacity.

Importantly, under section 37 of the Act health directives cannot authorise euthanasia or any other breach of the Criminal Code. This can include accelerating death, aiding suicide, or otherwise.

Making an enduring power of attorney

The document must be:

An advance health directive must also include a certificate dated and signed by a doctor which states that at the time, the principal appeared to the doctor to have the capacity to make the directive.

An enduring power of attorney is only effective if the attorney has accepted the appointment by signing the document.

Revoking an enduring power of attorney

Enduring powers of attorney can be revoked in the following way: