In Queensland, people often speak about “challenging” or “contesting” a Will. This generally can mean one of two things: they either doubt the validity of the Will, or they are unhappy with the bequest left for them under the Will and wish to seek more from the Estate. 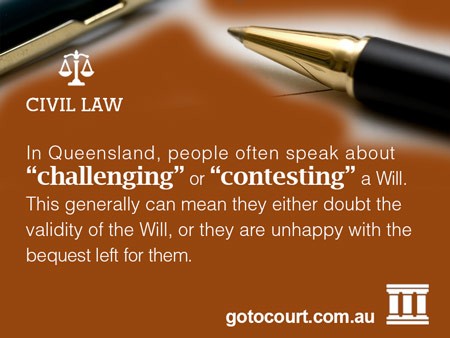 Laws in Queensland regarding challenging a Will

Some of the laws regarding challenging a Will in Queensland are not set out in legislation, but arise under the common law (i.e, case law precedents). This includes challenging a Will on the basis that a testator did not have testamentary capacity to make a Will (for example, he or she had an intellectual or mental disability), that the testator was coerced, was unduly influenced or was under duress.

Challenging the validity of the Will

Once a grant of probate is obtained, an executor is immediately able to carry out the testator’s instructions under the Will. In applying for the Grant, the executor is required to attest to the document’s validity and therefore the Court must be satisfied it is valid before issuing the Grant.

If you doubt the validity of the Will, then you must make this known to the executor as soon as possible after the deceased’s death and prior to the Grant being obtained. You may wish to lodge a caveat against the estate to prevent the Grant being obtained without prior notification to you. The procedure for lodging a caveat is under Chapter 15 Part 7 of the Uniform Civil Procedure Rules 1999. Lodging a caveat will force the executor to commence contested proceedings for the grant of probate, in which the Court will be asked to make a pronouncement either for or against the validity of the Will.

Who can bring a family provision claim?

In Queensland, a person must firstly be eligible to bring a claim under the Act and be either be a child, dependant or spouse of the deceased. These categories are actually much broader than at first glance, and if you are in doubt as to the status of your relationship with a deceased, you ought to seek legal advice regarding your position.

The definition of “spouse” is found at section 5AA of the Act and is extensive. It includes not only married or de facto spouses, but partners whose relationship is registered under the Relationships Act 2011 and some cases of former partners of the deceased who continue to be maintained by the deceased.

When a person may bring a family provision claim

If a person gets over the first hurdle and is able to demonstrate that they are eligible to bring a claim under the Act, they must then demonstrate that the provision was inadequate for their proper “maintenance and support”. This is done by them giving evidence as to their income, assets, liabilities and expenditure, as well as any medical, educational and lifestyle needs.

If a claimant can demonstrate that they have been left with inadequate provision, the next step is for the Court to determine what provision is adequate, in light of the claimant’s needs, the size of the Estate, and the needs of the other beneficiaries of the estate. The Court is given a wide discretion to make any order as it thinks fit, including making an order for a lump sum payment or a period payment such as an annuity.

A claimant must bring a family provision claim to the Supreme Court of Queensland within nine months of the death of the deceased. It is important to note that the time limitation is with respect to the date of the deceased’s death, and not the date that probate is granted. Therefore, in some situations, a claim may need to be brought before the executor obtains probate.

Civil Law, QLDChallenging A Will

Refund of a Residential Tenancy Bond (QLD)
Payment of a bond is generally required when renting a residential property. A residential tenancy bond is for the financial protection of the lessor, in the event the tenant breaches the tenancy agreement. Bonds are legislated under the Residential Tenancies and Rooming Accommodation Act 2008. This article outlines the process for refunding a bond at…
Read more… 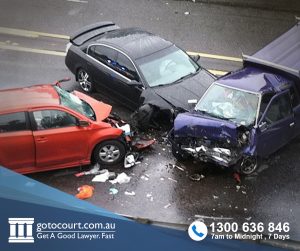 Motor Vehicle Accident Compensation (Qld)
This article concentrates on successfully claiming for compensation for damage caused by a motor vehicle accident in Queensland. Different laws apply in other states and territories. Property Damage If a motor vehicle is damaged in an accident, the owner of the motor vehicle has three choices available to them: 1.      Claim from their own…
Read more…