Offences that can lead to imprisonment

The criminal law of New South Wales is contained primarily in the Crimes Act 1900 (NSW). This Act also works in conjunction with federal legislation, such as the Crimes Act 1914 (Cth) and the Criminal Code Act 1995 (Cth). Both of these Acts address the interpretation of state law and when it may come into conflict with federal law. NSW also has additional criminal legislation to address specific offences, such as the Drugs Misuse and Trafficking Act 1985 (NSW) and the Crimes (Domestic and Personal Violence) Act 2007 (NSW).

In NSW, there are two types of offences:

Summary offences are usually smaller offences such as speeding fines and parking tickets. They can be decided solely by a sitting magistrate. However, under the Summary Offences Act 1988 (NSW), a conviction for a summary offence can still result in imprisonment. For example, a conviction under section 5 for wilfully and obscenely displaying your genitalia carries a term of six months’ imprisonment or a fine of 10 penalty units ($1,100 at the time of writing). 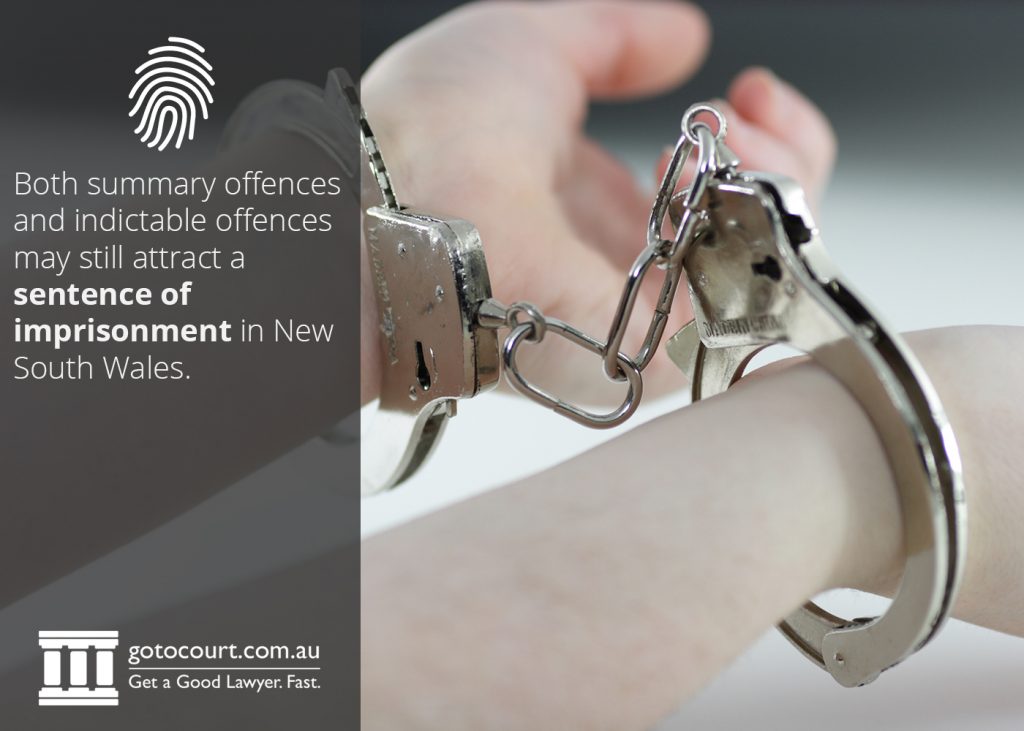 The Crimes Act 1900 also lists offences that can be dealt with summarily, such as stealing dogs and plants in gardens. However, the Act deals primarily with indictable offences which are serious enough to be heard before a judge and jury. There is a whole range of offences that can result in prison. The ones that carry the most severe penalties are in the table as follows:

Length of imprisonment and life sentences

As each offence can carry different penalties, the court applies sentencing principles. When determining an appropriate sentence to impose on the offender, the judge or magistrate must consider the circumstances of each and every case, and refer specifically to section 21A(3) of the Crimes (Sentencing Procedure) Act 1999 (NSW).

The Crimes (Sentencing Procedure) Act 1999 lists various factors that the judge or magistrate must take into account. These include the following:

Whether there were aggravating or mitigating factors which led to the offender’s criminal actions;

This is not an exhaustive list from the legislation.

The maximum sentence of imprisonment in NSW a judge can impose is a life sentence. Unless a non-parole period has been set, the offender will be ordered to spend the rest of their natural life in prison.

The standard non-parole period of murder for example, is 20 years. In the case of more aggravating circumstances such as the murder of a child or police officer, the non-parole period is increased to 25 years.

Although offences such as aggravated sexual assault in company can carry a life sentence, murder is considered especially unspeakable and is usually the offence that results in life imprisonment. For this reason, murder receives special consideration by the court under section 61 of the Crimes Sentencing Procedure Act 1999 (NSW). Under this provision, the court is compelled to impose a sentence of life imprisonment without parole if the murder was especially heinous.

This sentencing was seen in the case of Ivan Milat who was convicted in 1996 of the murder of seven backpackers in rural NSW, as well as the attempted abduction of British backpacker, Paul Onions. Milat received seven consecutive life sentences without the possibility of parole for the murders. He also received six years’ imprisonment in NSW for the attempted abduction of Onions. Milat was ordered to serve his sentence concurrently. Because of the cold-blooded and calculating nature of the abductions and murders, the court ordered that he will never be released from prison.

A recent example of the seriousness of murder is the sentencing of former police detectives, Roger Rogerson and Glen McNamara. Both were convicted of the murder of drug dealer Jamie Gao. The murder was vicious as they shot Gao, stole 3kg of the drug ice, then dumped his body in the sea. Justice Geoffrey Bellew referred to how both men had no remorse and described the killing as vicious and cold-blooded. His honour handed each man a life sentence without the possibility of parole. The pair have since appealed against the conviction and sentence.

What are the main prison facilities in New South Wales?

There are 36 prisons listed in NSW, however outlined below are the main prisons for adult offenders and their gender and security classifications:

If you wish to find out what jail someone is in, Corrective Services NSW recommend calling the Sentence Administration Branch which is available from 8.30am to 4pm Monday to Friday. You should avoid bogus websites that offer to do a free search as Corrective Services would never publish the names of prisoners.