Parole in New South Wales does not mean that an offender is simply freed from prison. It is a release from prison to serve part of their sentence in the community. Parole is a more effective way of protecting the community than simply releasing an offender at the end of their sentence without assistance and supervision. Release on parole is always conditional and the parolees must follow the conditions of their release. If they are not followed then parole may be revoked and the offender returned to custody. The decision to release an offender on parole involves a thorough review of all of the information available and the assessment of any risk. The law governing parole is contained in the Crimes (Administration of Sentences) Act 1999. 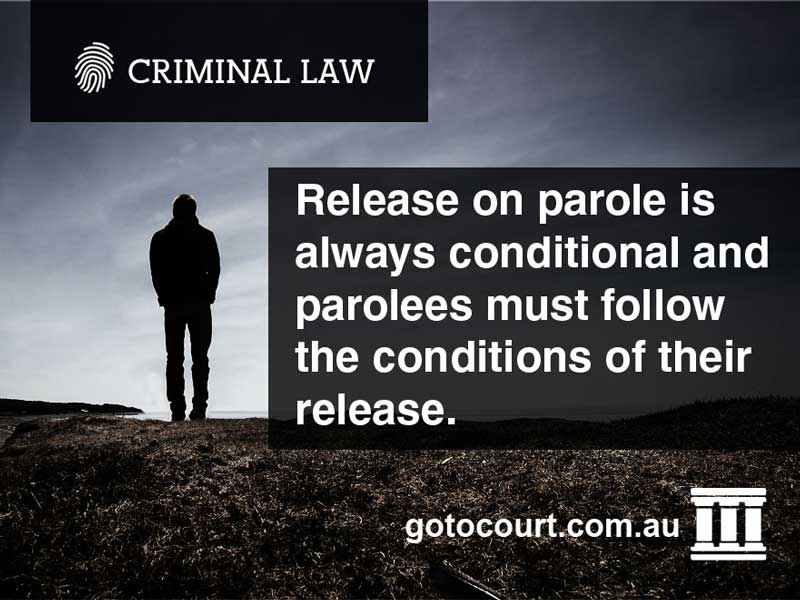 For sentences of imprisonment of 3 years or less, where a non-parole period has been set, the law requires the offender be released on parole, as of right, at the expiration of the non-parole period, under section 158(1) Crimes (Administration Sentences) Act 1999. At that time, the offender is automatically released on parole under the conditions that were set by the court.

The SPA is not to release an offender unless it is satisfied on the balance of probabilities that the release is in the public interest. In deciding this it can consider a number of factors including the past behaviour of the offender, the threat (if any) that the offender poses to the community, and any reports and assessments provided by the probation and parole service.

The offender must show the Authority that they are rehabilitated. To show this they must not commit any criminal offences in custody or any prison discipline offences. They may also have to progress through the prison classification system and obtain minimum security classification with weekend leave. This is subject to good behaviour and, depending on the type of offence, the completion of rehabilitation programs. While on parole an offender will be subject to regular visits and checks. They are also expected not to commit further offences. The SPA will also insist that the offender addresses their offending behaviour by completing courses it considers necessary to help prevent re-offending; such as drug and alcohol rehabilitation, anger management and/or violence prevention programs and sex offender programs.The SPA can revoke parole at any time without any notice necessarily being given to the offender. A warrant is issued and when the offender is arrested the revocation will be listed for hearing about 4 to 6 weeks later. The offender will appear at the hearing and can be legally represented. A court cannot grant bail in the meantime.