Challenging a will in New South Wales can be done on a number of grounds, including that the will-maker lacked testamentary capacity to prepare the will, or the will did not represent the will-maker’s intentions for a variety of reasons, including fraud, forgery or undue influence.

Alternatively, you may be challenging a will in New South Wales on the basis that you have been left with inadequate provision from an estate, and may therefore bring proceedings to seek a family provision order under the Succession Act 2006 (NSW).

If a will is set aside and another will does not exist or is not ordered by the court to be prepared, then the will-maker is treated as ‘intestate‘ and their assets will be distributed in accordance with a statutory formula in the Succession Act 2006.  See our article on preparing a will in NSW for more information. 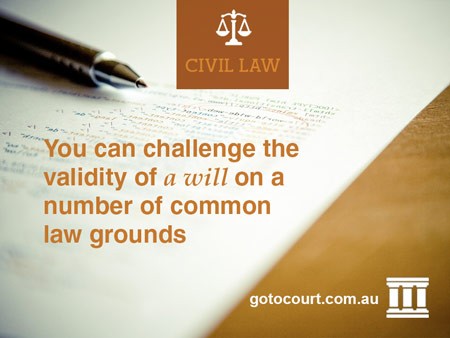 Challenging a will in New South Wales – no testamentary capacity

The leave of the Supreme Court is required to bring such a challenge. At the leave application, certain information, including evidence of the will-makers’ lack of testamentary capacity, must be given to the court.

At the actual hearing, the Supreme Court will consider the evidence given in the leave application and any other matters it considers relevant in making an order. It is not bound by the rules of evidence. It will only make an order revoking or altering the will if it is satisfied that the will-maker is reasonably likely to do the same if he or she had testamentary capacity.

Challenging a will in New South Wales – common law grounds

Fraud generally consists of some form of misleading or deceptive conduct which misleads the will-maker into making the will or a particular disposition under the will. If the will is revoked and the will-maker does not have another will, the will-maker will be an ‘intestate‘ and their assets will be distributed in accordance with a statutory formula.

Contesting a will – family provision orders

If you are left out of a will, or believe you have not been provided for adequately under a will, and the will-maker was your spouse or former spouse, your parent, your de facto partner, your grandparent (if you were wholly or partly dependent on them), or someone with whom you had a close personal relationship, you can apply to the court within 12 months of the will-maker’s death for a family provision order. A family provision order is an order which requires a suitable amount to be set aside from the will-maker’s estate for your maintenance, education and advancement.

The court will consider a number of factors in deciding whether to make a family provision order, including (but not limited to):

If the order is granted, it is treated as forming part of the will, or a codicil to the will.

Civil Law, NSWChallenging A Will