Fines in New South Wales are monetary penalties given to a person for breaking a law. It may also be called a penalty notice, an infringement notice, an on the spot fine, a ticket or a Criminal Infringement Notice (CIN). Fines can be issued by the Court, the Police or other government agency, such as City Rail or local Council. Laws set fines in the form of penalty units. One penalty unit is currently $110.00. 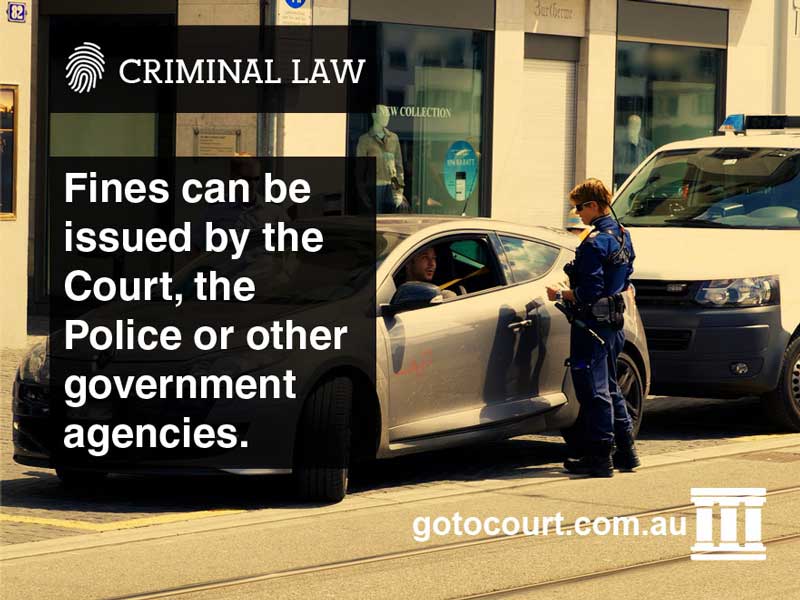 A private company may fine you if it says that you broke an agreement they had with you such as by parking longer than allowed in a private car park. Other private fines include fees for overdue videos or library books. If they want to enforce the fine they can file a Statement of Claim in the Local Court. To be successful it must be proved that you entered into a contract with them and breached that contract. These fines cannot be enforced through the State Debt Recovery Office (SDRO).

If you don’t pay a toll you will be sent a notice for payment of the toll plus an administration charge will usually be added on. It is not a fine. You can pay the toll, object to it, or complete a statutory declaration if you were not the driver. If you don’t do one of these things you will be sent a penalty notice (this is a fine) for the offence of non-payment of a toll. It can be enforced through the SDRO.If you are fined by the court you are given 28 days to pay. If you can’t pay within that time, you can apply to pay by instalments or for an extension of time of up to 3 months. You can lodge an appeal, either because you say you’re not guilty or because you believe the penalty is too severe within 28 days of being fined. You should get legal advice before you file an appeal. If you were not at court when the case was heard you may be able to have the decision annulled (cancelled) and the case re-heard. An application must be filed within 2 years of the decision. It may be annulled if you didn’t receive your Court Attendance Notice (CAN) or if you had good reason for not attending court or if it is in the interests of justice to do so. Unpaid court fines are enforced by SDRO.You may be fined if you disobey a traffic law, for example by speeding or not wearing a seat belt. Fines can be issued by Police or Roads and Maritime Services (RMS). RMS issue fines when an offence is caught on a speed or red light camera. You may also accumulate demerit points. Your licence can be suspended if you have too many points. (You may be able to appeal the suspension). You may be given a Court Attendance Notice (CAN) for some traffic offences and you will have to go to court and the court will decide whether to fine you and/or disqualify your licence.The police can issue fines called Criminal Infringement Notices (CIN) for minor offences such as shoplifting or offensive behaviour. If you have received a CIN you can elect to go to court and have it dealt with as if you had been charged with the offence. It will appear on your criminal history. You should get legal advice before electing to go to court.

You can also be fined for public transport offences such as travelling on a train without a ticket or placing your feet on seats. Police or Railcorp Transit Officers can give these fines. They are called penalty notices. Councils can also fine you for many offences, including not cleaning up after your dog and littering. Many government agencies, such as NSW Fisheries, can also issue fines.If you accept the fine, you can either pay it or ask to pay by instalments. If you don’t pay you will be sent a Penalty Reminder Notice giving you 28 days to pay. If you weren’t the person responsible for a camera or parking offence you can nominate the person responsible and the fine will be reissued to them.

You can ask the SDRO to withdraw the fine if you believe it is not fair, or you shouldn’t have been fined, or if you weren’t the person who committed the offence, or if you have a clear driving record for the last 10 years (if it relates to a traffic or parking matter that carries demerit points).

You can elect to take it to court if you don’t believe you committed the offence or if there are other reasons why it should be reconsidered. You can plead not guilty and defend the case, or guilty and explain why you broke the law and ask for leniency. You can also write to the prosecutor (called written representations) explaining why you are not guilty and ask them to drop the case against you. However, the court may order that you pay a higher fine and/or court costs, so you should get legal advice before electing to go to court or writing representations.If you don’t pay or arrange to pay by instalments the SDRO may enforce it by;

If they take any of these steps you may still be able to pay the fine, or pay it by instalments or challenge it in court.