If you are charged with an offence, police may or may not decide to arrest you. They can give you a notice to attend court or they can release you on bail. The court needs to consider two things when deciding whether to give you bail. You may have to show cause (depending on the offence you have been charged with and whether you were already on bail or parole when you were charged).  If you can’t show cause you will be refused bail. Then the court has to consider four things, also known as the bail concerns. These are:

If the court is not concerned about any of these factors, or if it thinks that any concerns can be addressed by putting conditions on your bail, then it will give you bail. The conditions that are put on your bail must be only the minimum necessary to cover those concerns. It is always a requirement of bail that you attend court on your next court date but other conditions can also be imposed, such as reporting to the police or having a surety deposit to guarantee your attendance.

When you are granted bail you have to sign an acknowledgment of the bail and its conditions before you will be released. By signing this you are agreeing to comply with all of the bail conditions. If you don’t, it is called a breach of bail. You can breach a bail in two ways, either by breaching a condition of your bail or by failing to appear in accordance with your bail undertaking. A failure to comply with a bail condition is not an offence but it can lead to the bail being reconsidered by the court. Failing to appear in accordance with a bail acknowledgment is a criminal offence. In New South Wales the law on Bail is contained in the Bail Act. 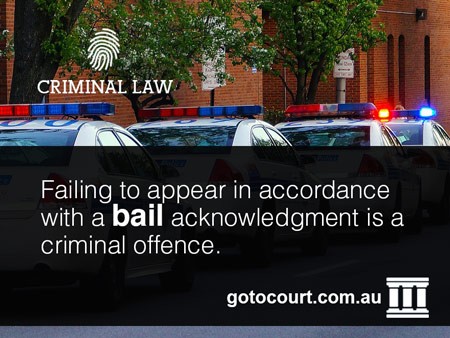 If you fail or are about to fail to comply with a condition of your bail the police have a discretion regarding what they will do. They can choose to take no action or they may warn you against any further breaches. They can also issue a court attendance notice for you to come to court, or apply for a warrant for your arrest, or arrest you without a warrant and take you before the court. The police will ask the court to either revoke your bail or vary the conditions.

In most circumstances, a failure to comply with bail is admitted. However, if it is not admitted, there will be a short hearing. The court must be satisfied on the balance of probabilities that the police have proved that the bail condition was breached (that is, that it is more likely than not). The court may take into account any evidence or information that they consider is credible or trustworthy and the normal rules of evidence don’t apply.

If you have failed to comply with a bail undertaking, a court can choose to either: