A defence is used to justify the actions of someone charged with a criminal offence. There are two types of defences, complete and partial. Crimes have what is known as essential elements and these elements must each be proved by the prosecution for a person to be found guilty of the offence. If a defence removes one of these elements it will prevent the prosecution from proving their case beyond a reasonable doubt. The defences all have their roots in the common law and some are now set out in legislation. Some offences have specific defences that apply to them as set out in the Crimes Act 1900, such as the defence of lawful correction to a charge of assaulting a child. 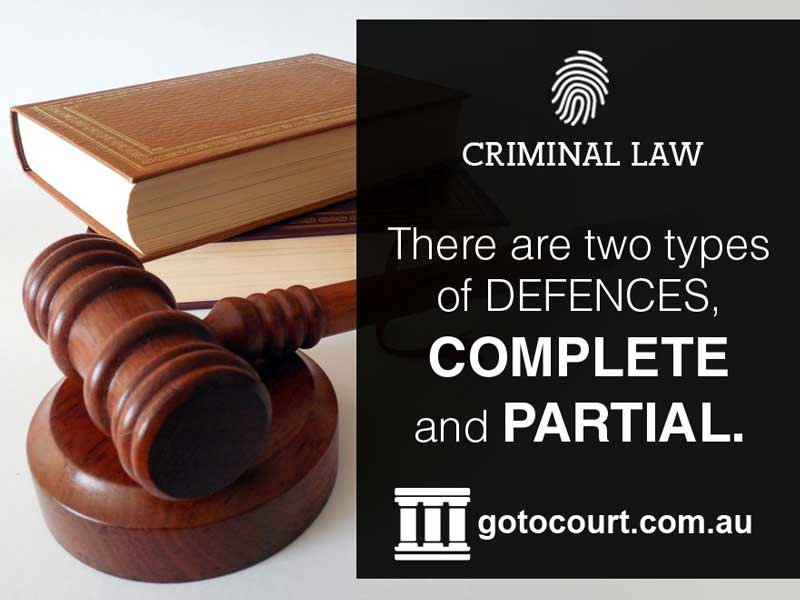 If a person has a genuine belief that they (or someone else they are acting for) have a legitimate claim of right to certain money or property it is a defence to any crime involving stealing.

Honest and reasonable mistake of fact

This defence applies to offences of strict liability (such as speeding). This is where a person has an honest and reasonable belief in a state of affairs which, if they existed, would mean that they were innocent. It does not apply if the mistake is a mistake as to what the law is.

The law does not consider that people who suffer severe mental illness are responsible for their actions. For this defence to be successful the person charged must prove that they did not understand ‘the nature and quality’ of their act due to their mental illness. This means that they must prove that they did not know what they were doing or that they knew what they were doing but didn’t understand that it was wrong. If this is proven, they do not return to the community but are held in a mental health facility for an indefinite period of time, which could be much longer than the sentence they might have received if they had been proven guilty of the crime.

The defence of necessity operates where circumstances (natural or human threats) cause a person to break the law to avoid even more serious consequences. They must prove that they genuinely believed that what they did was necessary and it must not be out of proportion to the harm that they were trying to avoid happening.

The defendant must prove that the crime was committed only because of a genuine threat or intimidation, such as their own or someone else’s life being at risk. This defence does not apply to murder or manslaughter.

A victim cannot consent to murder or to the infliction of grievous bodily harm, but may be able to consent to a charge of assault. Consent is most commonly raised as a defence in sexual assault cases.Partial defences only apply to a charge of murder. They do not result in acquittal of the charge but instead they can lead to a conviction for the lesser charge of manslaughter. They lessen the seriousness of the defendant’s behaviour but do not excuse or justify it. It is important to note that partial defences do not apply to lesser charges such as assault.

The defendant must prove that their actions were directly provoked by the victim. They must establish that the victim’s actions would have caused any reasonable person to act as they did.

The defendant must prove that they were suffering from an abnormality of the mind at the time of the offence which substantially impaired their mental responsibility. This defence cannot be relied upon to excuse the accused if they were under the influence of alcohol or other mind altering drugs.