The Drug Court in New South Wales attempts to address the issues underlying drug dependency which result in criminal offences being committed. It aims to promote re-integration into the community and to reduce criminal activity resulting from drug dependency. If accepted into the program the offender will participate in programs designed to eliminate, or reduce dependency on drugs.

The Drug Court of New South Wales operates according to the Drug Court Act (1998). All participants are represented by specialist solicitors from Legal Aid. The Bureau of Crime Statistics and Reporting has found that compared with similar offenders, those treated through a Drug Court program were 37% less likely to be convicted of another offence in the future. 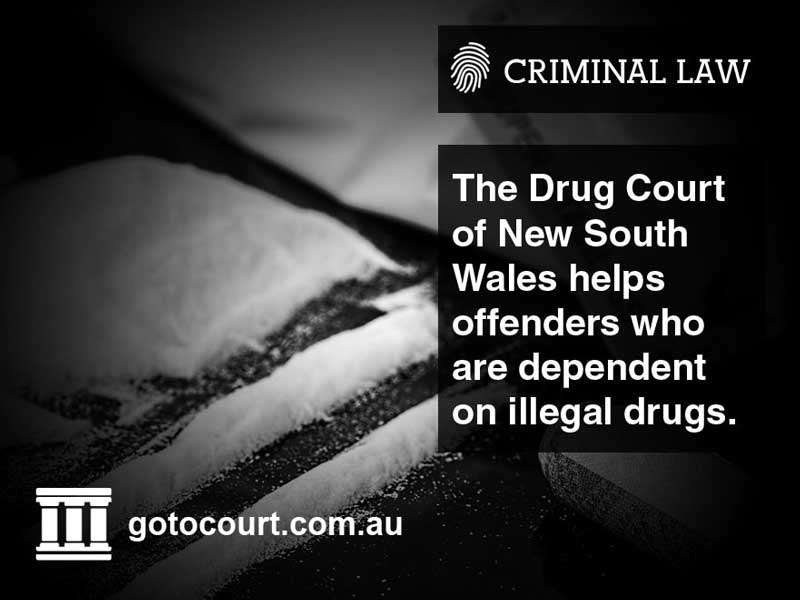 The Drug Court in New South Wales helps offenders who are dependent on illegal drugs. There is a drug court in Parramatta, Toronto and Sydney. To be eligible you must be over 18 years and be willing to take part in the program. You must also live in one of these local government areas – Auburn, Bankstown, Blacktown, Campbelltown, Fairfield, Holroyd, Hawkesbury, Parramatta, Liverpool, Penrith, the City of Sydney, The Hills Shire, Port Stephens, Cessnock, Maitland, Newcastle, Port Stephens or Lake Macquarie.

You must also be required to appear in one of these courts:

You must be likely to receive a sentence of full-time imprisonment for your charges and must either plead guilty or indicate that you would plead guilty if accepted.  If there are more eligible applicants than there are available program places, a weekly random selection process called the drug court ballot takes place to choose who will enter the program.

The Drug Court Registry staff will conduct a preliminary eligibility screening to make sure you fit the above criteria before you are accepted for assessment into the program. You are not eligible if you are charged with an offence involving violent conduct, a sexual offence, serious drug offences or if you suffer from a mental condition that could prevent or restrict your proper participation in the program. The first stage of the program is a two week detoxification and preparation phase. This takes place in a specific section of a correctional centre set aside for this purpose. After detoxification and assessment, you will appear in the Drug Court to enter your guilty plea and receive a sentence. That sentence is suspended conditional upon you agreeing to the terms of the program. Initially you will be required to attend court on a weekly basis and undergo drug testing three times a week. You will be given assistance to stabilise your physical health and are expected to stop any criminal activity. After that you can move on to phase 2 of the program. Then drug testing will be reduced to twice a week and your court dates will be fortnightly. You are expected to continue to consolidate your health, life and job skills.

In phase 3, drug testing remains at twice a week but you only have to attend court once a month. You are expected to gain or be ready to gain employment, and to be financially responsible. The program includes rewards for satisfactory compliance with the terms of the program. It also includes sanctions if you fail to comply with the program. The most severe form of sanction is termination from the program and custodial sanctions of up to 14 days can also be imposed. Community work, increased supervision and other community-based sanctions are also available.Unless it is terminated sooner, the program will last for at least 12 months.

When a program is terminated the court will reconsider the initial sentence that was handed down. They can confirm that sentence or set it aside and impose another sentence instead. It cannot increase the sentence. In deciding the final sentence the court will consider the nature of your participation in the program, any time that you have spent in custody and sanctions that you have served.

If the court finds that you have substantially complied with the program a bond is the usual final court order. The court awards a Certificate of Graduation or a Certificate of Substantial Achievement to participants who have met the standards that the court has set.