In New South Wales, it is illegal to drive with the presence of illicit drugs in your system. The law relating to drug driving is set out in the Road Transport Act 2013.  Any driver, rider or supervising licence holder on a road or road related area can be directed to take one or more oral fluid tests. These test for the presence of 3 illegal drugs, Delta-9-tetrahydrocannabinol (THC), which is the active component of cannabis, methyl amphetamine (‘ice’, ‘speed’, ‘crystal meth’, ‘base’ etc) and methylenedioxy-methamphetamine (MDMA or ‘ecstasy’).

The oral fluid test won’t detect the presence of prescription drugs, including those medicines containing amphetamine–like substances, such as cold and flu tablets. The test will detect cannabis for several hours after use, though the exact time is dependent on the amount and strength of the cannabis taken. There is no evidence to suggest that being in the presence of someone smoking cannabis (passive smoking) will be detected by the oral fluid test. For the other 2 types of drugs, the test may detect their presence for up to 48 hours after use, though the exact time will vary depending on the amount taken, the strength of the drug and how the drug has been taken.

It is also an offence of drive in New South Wales with the presence of cocaine or morphine in blood or urine.  Drivers are not randomly tested for these drugs using the roadside drug tests described above. The testing must take place at a police station or hospital within 2 hours of the person driving, or the result is not valid and cannot be used in court as evidence. 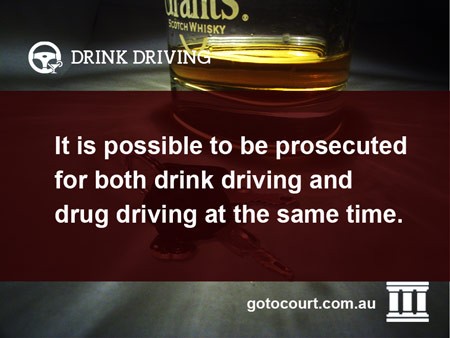 A preliminary oral fluid test will usually be conducted through the window of your vehicle. You will be asked to lick the test pad of the device and the result will be known in about 5 minutes. If  the test is positive you will be required to go to the police support vehicle or the police station where you will provide a further sample of your oral fluid (saliva), which will be tested using a different oral fluid screening device. This test takes about 20 minutes. If the result is positive you will be unable to drive for 24 hours. The remaining portion of your saliva sample from this test will be sent to the Division of Analytical Laboratories for testing. If they find one or more illegal drugs in the saliva sample, you will receive a Court Attendance Notice for the charge of driving with the presence of an illicit drug. The Court Attendance Notice will include the details of the charges as well as the time, date and location for your court attendance. The remaining proportion of the saliva sample will be stored at the laboratory for 6 months. If you dispute the test result, you can apply for a portion of your sample to be independently analysed by another laboratory at your own expense.

If you have been charged with a drug driving offence it is a good idea to seek legal advice about the nature of the charges and possible penalties and whether any defence or avenue of appeal is available to you.  It is also a good idea to have legal representation at the court appearance when the charges will be heard by the court.

Drink Driving Record Broken Again
Late last year, a woman from Queensland’s Gold Coast was awarded the dubious title of Australia’s most intoxicated drink driver having recorded a blood alcohol content (BAC) reading of 0.48, nearly 10 times the legal BAC limit. Her record has, unfortunately, now been broken with a New South Wales woman recording a BAC of 0.486. The…
Read more…

Interlock Orders in NSW
Once a voluntary scheme, Interlock Orders in NSW (New South Wales) have, since 1 February 2015, become mandatory for the courts, subject to very few exemptions, when sentencing those convicted of particular drink driving offences. The orders require the driver to install and use an interlock device in order to resume driving earlier than would…
Read more…