The law of defamation exists to protect a person’s reputation, while still preserving the right of free speech. In 2006, all of the Australian states enacted defamation laws that are largely similar. In Tasmania the civil laws are contained in the Defamation Act and the criminal law is outlined in the Criminal Code Act. Defamation includes written and oral material. The material must have been published, it must identify a person/s and it must be defamatory. Publication means that the material was communicated in some way to another person.

If any potential recipients of the material would be able to identify the person it does not matter that they are not specifically named. Material is defamatory if is likely to disparage or discredit someone’s reputation. This will depend on all the circumstances of the publication and the views of society as a whole. Anyone can be defamed. However, corporations cannot sue for defamation unless they either employ less than 10 people or their members are unpaid. 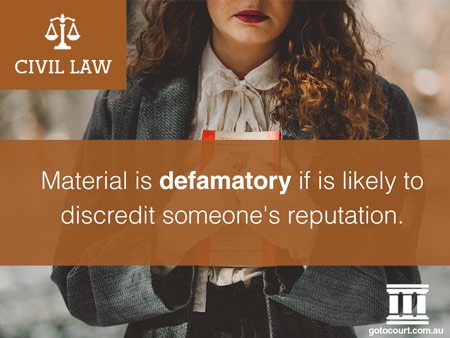 There are two remedies for defamation, an injunction to prevent publication and damages after publication. An injunction will not be given if the party publishing the material says they have a defence to a claim for defamation and that it is for the public benefit that the material is published. An award for damages must have a rational relationship to the harm. This is a matter for the court to decide.

An apology is not an admission of fault and it does not prevent or stop court action. However, it will mitigate damages. Amends can be made generally, or in relation to specific statements. It must be made within 28 days of the receipt of a concerns notice setting out the defamation. The offer must state the statement it relates to and include an offer to publish a correction and to pay any reasonable expenses incurred by the person. After accepting amends, the defamed person can’t start, continue or enforce a claim for defamation. It will also mitigate the damages awarded if there has been a publication of similar material and there is another defamation claim already filed in court, or for which the defamed person has already received or agreed to compensation.

A person who publishes defamatory material knowing it is, or not caring if it is, false with the intention to, or not having regard to whether it will, cause serious harm to the victim or any other person is guilty of a crime. All of the defences available to a civil action apply to a criminal charge. A criminal charge does not prevent a civil action being taken for the same statement.