As mentioned in our article on how to make a will in Tasmania, the laws relating to wills are very similar across each of the States and Territories. The Wills Act 2008 is the main piece of legislation regarding how wills are made in Tasmania. This similarity also extends to challenging the validity or interpretation of a will. For example, a will can be challenged on the basis that it did not satisfy the rules set out in the Wills Act 2008 for how to make a valid will. Also, the Tasmanian Supreme Court can order that a will be rectified in certain circumstances. Some relatives of the person who created the will (known as the ‘testator’) can also challenge it if they were not nominated by the testator as a beneficiary or were left with inadequate provision. In these cases, a family provision order may be made. The rules for how these kinds of orders are made are set out in the Testator’s Family Maintenance Act 1912. 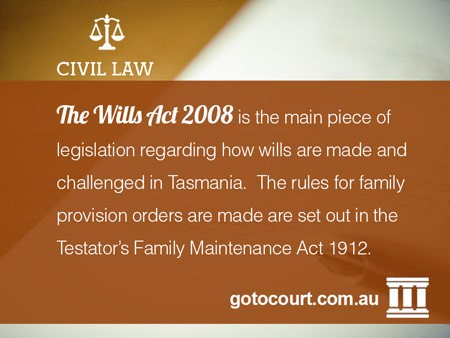 If the Supreme Court of Tasmania is satisfied that a will has a clerical error or does not give effect to the instructions of the testator, it can order that the will be rectified. An application for rectification can be made by any person, but must usually be made within 3 months of the testator dying. If any distributions have been made from the testator’s estate before rectification of the will is applied for, the person who made the distributions will not be liable for making them.

Rather than challenging the validity of a will, proceedings can be commenced for the purposes of construing what the will actually means. In these cases, evidence can be used to help with interpreting the will, but only if its meaning is unclear, ambiguous on its face, or ambiguous in light of the surrounding circumstances. There are other rules in the Wills Act 2008 dealing with how a will is to be construed.

Common law grounds for challenging a will

Each of the above grounds for challenging a will are found in statute. There is also a series of common law grounds that can be relied on. For example, a will can be challenged if the testator made a later will, which causes the earlier will to be revoked. Alternatively, a will can be challenged if the testator was pressured or unduly influenced in making the will. A will which was created because of a forgery or fraud can also be challenged under the common law. If a will is revoked on one of these grounds, the testator will die as an ‘intestate’ and their assets will be distributed based on a statutory formula. This should be kept in mind when challenging a will, because you may not benefit from revoking the will at all.

Under the Testator’s Family Maintenance Act 1912, certain relatives of the testators (which includes, for example, their spouse, children, parents or former spouses) may be able to apply to the Tasmanian Supreme Court for an order that part of the testator’s estate be set aside for their benefit. This kind of order is known as a family provision order. It usually provides for the payment of a lump sum to the surviving relative. Applications for these orders must generally be made within 3 months of probate being granted to the executor.

Civil Law, TASChallenging A Will