Character references are an important tool that can be used to influence the outcome of a court case. This is because the testimony of the people in your life will show the court that you are of good character and are not a threat to yourself or the community. If you ever find yourself charged with a simple drink driving/traffic infringement or a more serious offence such as assault, a well-written reference can assist your case.

In Tasmania, there are various guidelines that must be followed when writing a character reference. Following these guidelines will give you the best chance at demonstrating to the court that you are of good character outside of the offence you have committed. Ultimately, this may in turn result in a more lenient penalty being handed down.

Who can write the reference? 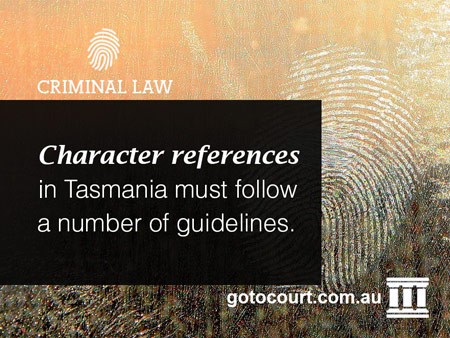 A character reference needs to be detailed enough to include very specific examples of your character and involvement in every day life. Any person may act as your referee as there are no strict rules set by the court in this regard. As such, your family, friends, neighbours, teachers or other members of the community may provide a character reference for you.

What you should not include in a character reference

As stated above, the Tasmanian court imposes very strict guidelines as to what they will accept a character reference. These guidelines are set out below;

When you are organising a character reference, remember that you are presenting the document in court and therefore must observe proper court etiquette at all times.

How to structure a character reference

The character reference should be set out like a letter and must include the following structural qualities;

How to write a character reference

It is important to remember that the character reference should be written in a formal tone but also needs to be written in the voice of the person writing the reference. The following guidelines should be followed by the writer;

In addition to the general content guidelines set out above, it is important to tailor the character reference to discuss the specific issues highlighted by the offence committed.

Jury Service (Tas)
In Tasmania, some criminal matters and a few civil matters are determined by a jury. The right to trial by a jury is based on the principle that limits should be placed on the power of the state over people’s lives. However, the vast majority of criminal matters in Tasmania are dealt with summarily (in…
Read more…

Youth Detention (Tas)
The only youth detention centre in Tasmania is the Ashley Youth Detention Centre. It is operated by Children and Youth Services and houses both males and females between the ages of 10 and 18. Young people aged over ten who are charged with criminal offences in Tasmania can be remanded or sentenced to detention under…
Read more…

Animal Cruelty Offences (Tas)
The Tasmanian Animal Welfare Act 1993 regulates the treatment of animals under human care or charge, including domestic animals and animals held for commercial purposes. The act defines animal as including all live vertebrate animals except for humans. The act stipulates that humans having control of animals have a duty of care and sets out…
Read more…

Dangerous Criminal Declarations (Tas)
Tasmanian legislation allows courts to declare a person a dangerous criminal if they fulfill certain criteria. A declaration that an offender is a dangerous criminal means that the person is not released from custody until the declaration is discharged. In practice, this can mean that an offender remains in custody for many years beyond the…
Read more…