Reports of police misconduct in Victoria can be made against officers in the police force as well as protective service officers (PSOs), public service employees of Victoria Police who work in administrative and professional roles, and police officers in training.

Where to report police misconduct in Victoria

Three different bodies can deal with complaints about the conduct of police in Victoria.

If your complaint is minor, you should contact the Station Commander at your local police station or at the police station nearest to where the incident occurred. If your matter is more serious, a complaint can be made to the Police Conduct Unit of the Victoria Police Professional Standards Command (PSC), or to the Independent Broad-based Anti-corruption Commission (IBAC).

If your complaint concerns racism, discrimination or human rights issues, you also have a right to complain to the Victorian Equal Opportunity and Human Rights Commission.

Making a false complaint or creating a false belief is an offence under both the Independent Broad-based Anti-corruption Commission Act 2011 (IBACA) and the Crimes Act 1958.

Making a complaint about police misconduct in Victoria

Police misconduct in Victoria is defined in the Victoria Police Act 2013 and the IBACA to include:

When making a complaint, please ensure you include all known details, such as:

Make sure you sign your complaint if you are putting it in writing and keep a copy of it. 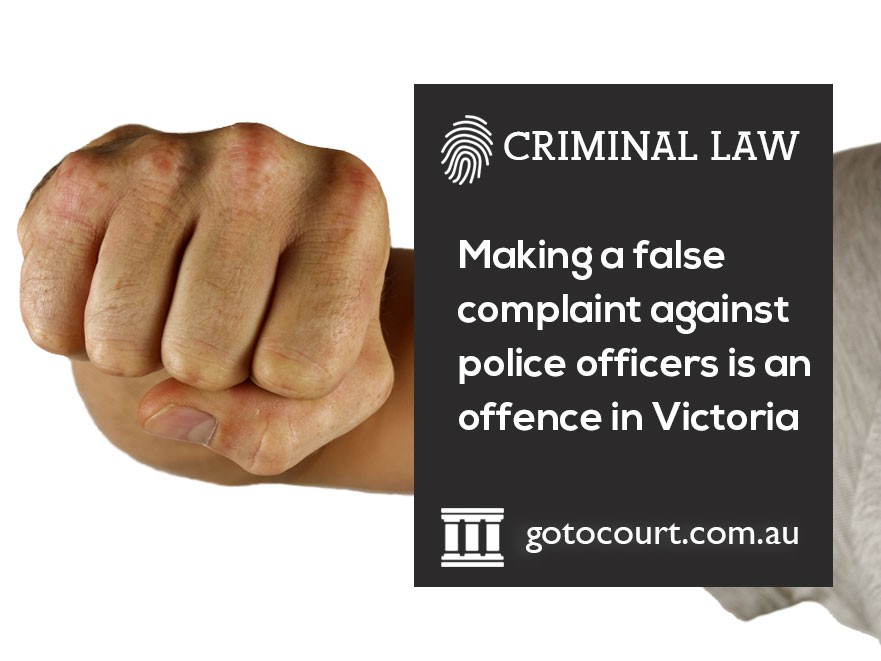 If you have a complaint about more serious police misconduct in Victoria, or if you have spoken to the Station Commander and still wish to make a formal complaint, you can do so by using the online form.

The PSC is responsible for setting and promoting high standards of practice, performance, conduct and integrity within Victoria Police. It investigates allegations of unethical behaviour or misconduct, and is responsible for education and training which enhances the ‘ethical health’ of the force.

The Victorian anti-corruption commission, IBAC, has authority to investigate complaints of poor police behaviour, including serious misconduct and corruption.

When a complaint is made to IBAC, they can either:

You can lodge your complaint online.

Sometimes, a complaint will be a ‘protected disclosure complaint’. These used to be known as ‘whistleblower’ complaints. In these cases, the person who makes the complaint has legal protections under the Protected Disclosure Act 2012 (PDA).

If it is deemed protected:

If your complaint about police misconduct in Victoria is a protected disclosure, you can’t divulge the details to anyone except your lawyer, an interpreter (if required), or (if under 18) a parent or guardian.

This article reflects the state of the law as at 25 January 2016. It is intended to be of a general nature only and does not constitute legal advice. If you require legal assistance, please telephone 1300 636 846 or request a consultation at gotocourt.com.au.