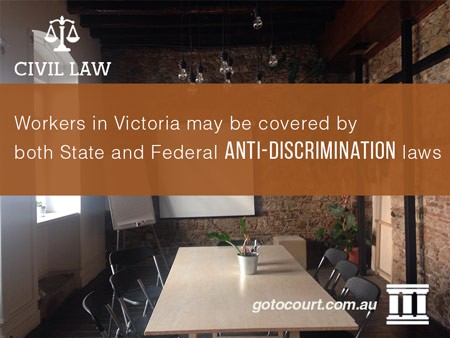 The Act not only prohibits workplace discrimination in Victoria, but also sexual harassment, victimisation and vilification.  Sexual harassment is unwelcome and unwanted sexual attention which a reasonable person would find offensive.  Victimisation occurs when a person makes a complaint and is thereafter treated less favourably because they have made a complaint.

Employers may be absolved of liability for the discriminatory actions of one their employees, agents or principals if they can demonstrate that they took reasonable steps to prevent the conduct from occurring.  This is why most employers will ask their employees to read and sign policies regarding equal opportunity and discrimination either at the commencement of, or during, the employee’s employment.

Complaints regarding contravention of the Equal Opportunity Act 2010 can be made to the Victorian Equal Opportunity and Human Rights Commission, which can be done either over the phone, online, in person or via post.  Complaints must be brought within twelve months of the alleged conduct otherwise the complaint may be rejected by the Commission.  The Commission has the power to refer parties to dispute resolution, however unlike some jurisdictions this is voluntary and a party may withdraw from dispute resolution.

Complaints regarding workplace discrimination in Victoria can also be made directly to the Victorian Civil and Administrative Tribunal (VCAT) which exercises original jurisdiction in relation to the complaint.  VCAT may also hear a complaint referred to it by the Commission if the dispute resolution processes are unsuccessful and the complainant wishes to proceed with action against the employer.  If there is a finding of unlawful discrimination, VCAT may order that compensation be paid to the aggrieved party, order that the conduct be stopped, or make any other order by way of redress for the discriminatory conduct.

Complaints must be lodged with the AHRC within 12 months of the alleged conduct otherwise the President may terminate the complaint.  The President may also terminate a complaint if she determines that the conduct was not unlawful, or if it was trivial, lacking in substance or misconceived, vexatious or frivolous.

The AHRC has the power to direct that parties to a complaint attend a conciliation conference with a view to resolving the matter.  In the event that the matter is not settled at conciliation, the AHRC must terminate the complaint and if the complainant wishes to pursue the matter further, he or she is required to bring an application to the Federal Circuit Court within 60 days of the notice of termination of the complaint.

Under section 351 of the Fair Work Act 2009 (FWA) it is unlawful for a national systems employer to take adverse action against an employee on the basis of protected attributes including race, sex, sexual orientation and age.  If an act or conduct is not unlawful under Victorian state legislation then it is not unlawful under the FWA.

There is a strict time limitation within which an employee must bring a complaint to the FWA if the adverse action resulted in the dismissal of the employee, which is 21 days from the date of dismissal.  For any other conduct, the complaint must be brought within one year of the alleged conduct.  The FWA will usually conciliate a complaint, and if it is unsuccessful, will refer the matter to arbitration.  The FWA also has the power to make orders for compensation, declaratory relief or injunctive relief to stop the discrimination from occurring.

Breaking a Lease for a COVID-19 Reason (Vic)
On 24 April 2020 Victoria passed legislation temporarily amending the Residential Tenancies Act 1997 in response to the COVID-19 pandemic. The COVID-19 Omnibus (Emergency Measures) Act 2020 will be in force for six months. Among other things, it seeks to protect tenants and landlords who are unable to perform their obligations due to a COVID-19…
Read more…