In case you have not heard, Trump’s immigration ban is dead, for now. But what about Australia? Can we implement a similar law preventing people from entering and remaining in the country on the basis of their passport or where they have recently travelled?

As it turns out, Australia could see its own “Muslim ban”.

Enter the Migration Amendment (Visa Revalidation and Other Measures) Bill 2016

Through the Migration Amendment (Visa Revalidation and Other Measures) Bill 2016, the Immigration Minister could have the power to cancel a visa on the basis of where the person comes from. This would be subject to the Bill passing both Houses of Parliament. 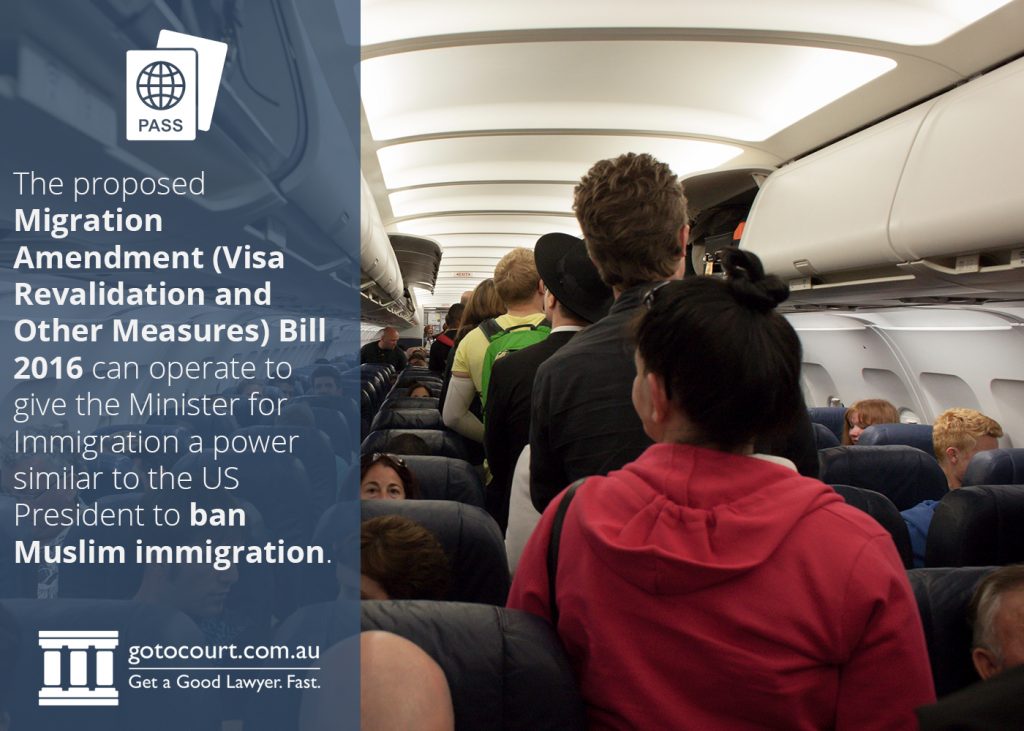 The legislation does not specify what adverse information would be, leaving the definition for the Government.

An Australian Muslim ban would be different to Trump’s

Australia’s legal and political system is different to the United States. The key difference being how each country treats the separation of powers.

In Australia, we elect our Members of Parliament and Senators directly in our electorates and states respectively. The party which has the most MPs in the House of Representatives is the one that forms government.

In the US, citizens get to elect both their parliamentarians and the Government separately. Under their constitution and system, they get to directly choose their President.

This is how President Trump’s January 2017 Executive Order did not succeed – the Federal District and Appeals Courts said that the Executive Order was at odds with the US Constitution.

Australian MPs can form government on the basis of holding a majority in the House of Representatives. The Australian Government’s power, and that of the Prime Minister, is more limited than our US counterpart.

Our Prime Minister can only administer the power available to them that is already law. It is the same with the entirety of the Government.

If the Australian Government is not happy with how the law proposes things should be managed, it must get a new law passed by both the House of Representatives and the Senate.

Laws passed by our Parliament and enforced by the Government are then tested in Australian Courts.

No protection under the Australian Constitution

The key reason why President Trump’s immigration ban failed was because it was deemed ‘unconstitutional’. The US Courts said that while Trump has the undeniable right as US President to make Executive Orders, the subject of those Orders has to be within the boundaries of what is permitted under the US Constitution. Specifically, the Executive Order banning immigration from seven predominantly Muslim countries amounted to a breach of the Fifth Amendment to the US Constitution – the United States Bill of Rights.

Australia currently has no such Bill of Rights or even a Human Rights Act. As a consequence of the limited personal rights enshrined in Australia’s Constitution, there would be no constitutional protection afforded to migrants if their visas were cancelled under the proposed laws.

It is up to our elected representatives, not the courts

As Australia’s Courts are limited to applying only what is the law and the Constitution, they could make no such order stopping the Minister from cancelling visas on the basis of where those migrants have come from.

Instead, Australians rely on our elected representatives to debate and vote on whether the Government should be given the power to make a Trump-like immigration ban.

Checks and balances are in the legislation

Further, the Bill requires the Minister to put a statement about the order before both houses of Parliament. The statement cannot name a particular person or include any identifying information.

In its Explanatory Memorandum, the Government explains it will use this personal public interest power sparingly. In particular, only in light of cases where there is an ‘increased risk to the Australian community resulting from a health, security or other incident’ in a particular place and the Minister believes it is in the public interest to act quickly.