The ACT government has introduced a new offence aimed at improving road safety for all road users.

Introduced by Part 1.10 of the Justice and Community Safety Legislation Amendment Bill 2016, the new provision, s 28A in the Crimes Act 1900, makes it an offence to:

It does not matter if the vehicle is moving, stationary, or parked, nor does it matter whether the object actually made contact with any part of the vehicle.

The offence applies even though the person was only reckless as to whether or not someone was in the vehicle, or as to the location of the vehicle, or the risk to someone’s safety.

For this offence, ‘vehicle’ includes any kind of motor vehicle, trams, trains, bicycles, an animal which is being ridden by a person, or any kind of animal-drawn vehicle.

The offence attracts a penalty of up to 2 years in prison.

The introduction of the offence comes as something of a relief for many road users, particularly cyclists. In the experience of the President of the Canberra Cycling Club, Nathan Edwardson, cyclists being the target of objects thrown from vehicles or the side of the road is ‘all too common’. He has personal experience, having narrowly missed two half-bricks which were thrown from a vehicle at the group of cyclists in which he was riding. ‘Luckily they were a poor shot’, he said. 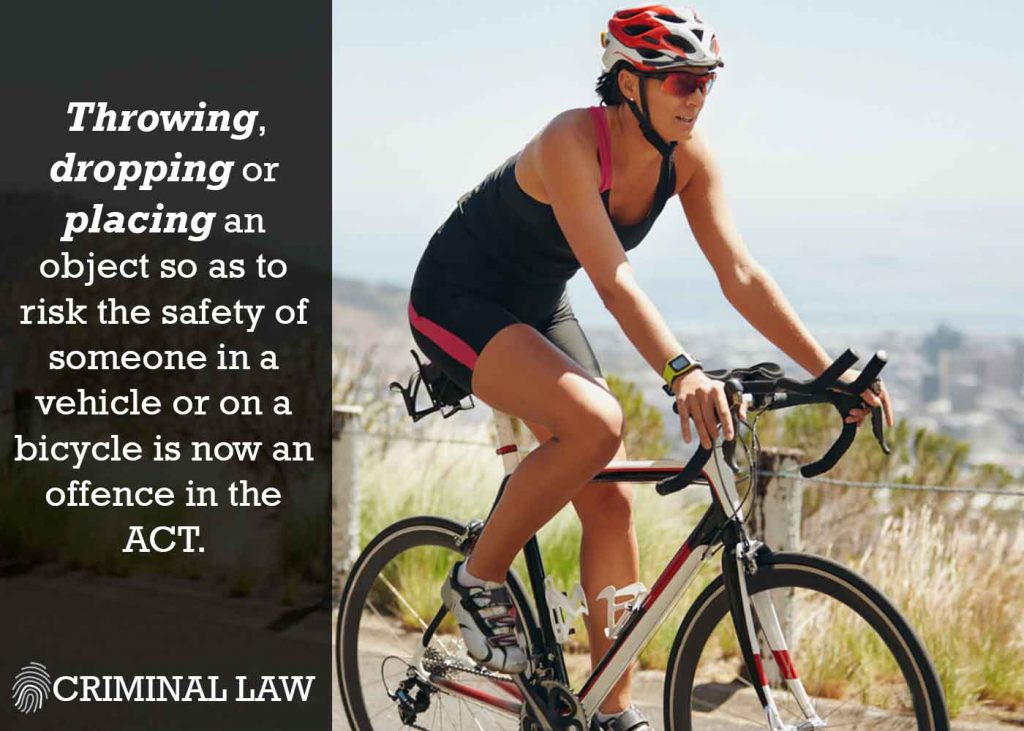 President of Cycling ACT, Lisa Keeling, concurs, having been the target of a number of objects such as eggs and a thickshake. ‘It is only a small minority who throw things at cyclists, but they need to have consequences and take it seriously that someone could get hurt. A lot of our members talk about … how dangerous it is and how unsafe they feel.’

Minister for Road Safety in the ACT, Shane Rattenbury, stated that the new offence ‘will help protect the territory’s road users from irresponsible and dangerous actions’. ‘Many regular cyclists’, he claims, ‘will have a story of being hit or nearly hit by an object thrown from a car.’

People just don’t realise that even if it is only an apple core or a banana peel it can have a serious impact on someone’s life.

The introduction of the new offence follows the implementation of other road-safety measures such as the setting of minimum passing distances for overtaking bicyclists, making allowances for cyclists to cross roads at low speed over marked crossings, and trialling lane filtering for motorcycles.

Mr Edwardson is hoping the new offences will result in a shift in culture. ‘People just don’t realise that even if it is only an apple core or a banana peel it can have a serious impact on someone’s life.’

The good news for law enforcement is, with the increasing popularity of cameras mounted to cycling helmets, many offenders will be very easily identified and the cases will be quite easy to prosecute.