457 Visa Is out, New Temporary Skills Shortage Visa Is In: What You Need to Know

On 18 April 2017, the Prime Minister Malcolm Turnbull and Immigration Minister Peter Dutton announced that there will be no more Temporary Work (Skilled) Visas subclass 457. At the same time, they announced that from 19 April 200 occupations will be removed from the Consolidated Sponsored Occupation List for 457 visa applications.

The Consolidated Sponsored Occupation List has now been replaced with the ‘Short-term Skilled Occupation List’ (STSOL). For simplicity, the Department have merged the STSOL with the ‘Medium and Long-term Strategic Skills List’ (MLTSSL), referred to as the combined list of eligible skilled occupations. 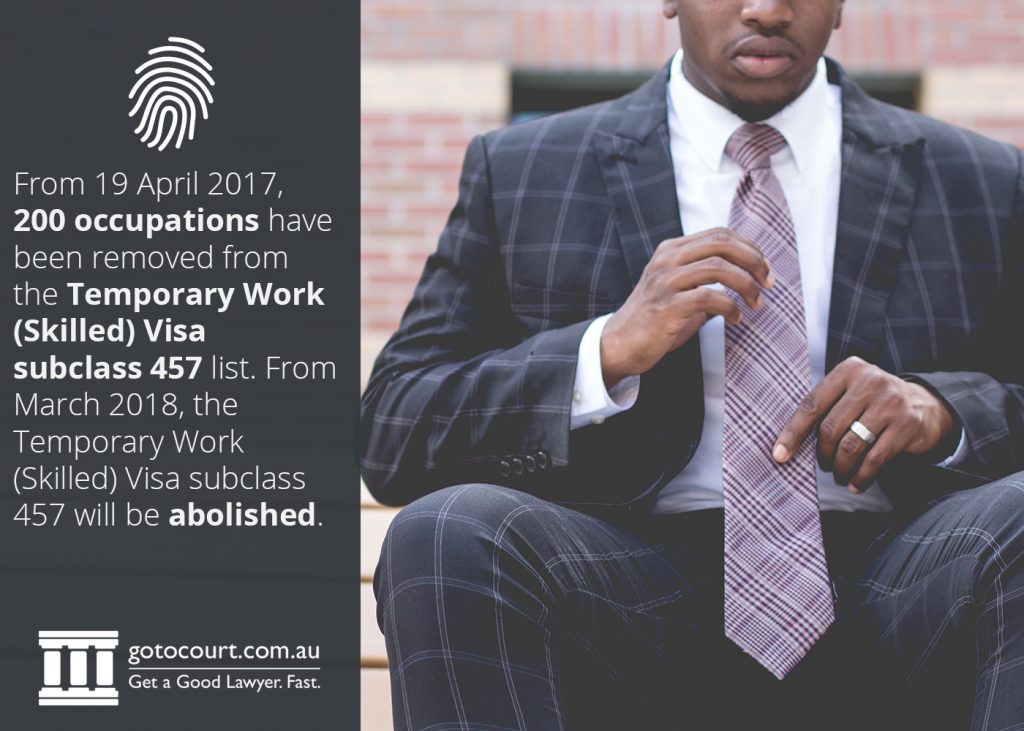 In their announcement, the Prime Minister and the Immigration Minister said there will be a new visa comprising of two streams which will replace the Temporary Work (Skilled) Visa subclass 457:

While there is currently no legislation drafted for us to know exactly what criteria will apply to these new visas, the Department has clarified that the reforms will be implemented over four stages.

From the 19 April 2017, there are significant changes which impact visa applicants immediately. This is the change to the occupation lists. As the operation of those lists is now highly targeted, it is best to speak with a migration lawyer about your particular circumstances.

Instead, the occupation lists will be revised on 1 July and the English language salary exemption will be removed. New legislative instruments will also come into effect, clarifying the Government’s position about training benchmarks.

New character checking requiring visa applicants to supply police clearance certificates will become mandatory on 1 July 2017. We have yet to confirm if this will apply to 457 visa applications lodged and still pending on 1 July or if it will only apply to new applications from 1 July.

December 2017 will see the Department commence data matching with the Australian Tax Office’s records to ensure 457 visa holders are paid correctly. The publication of sanctioned sponsors will also begin.

In line with the Prime Minister and the Immigration Minister’s announcement, the 457 visa will be abolished and replaced with the new TSS Visa from March 2018. Some migration agents have suggested that the TSS will be similar in application to the 457 visa with a substantially limited number of occupations for applicants and employers to choose from.

Without seeing what the legislation and criteria looks like, it is too soon to know exactly what would be involved in obtaining a TSS visa in either stream. What we do have is the Department’s initial key information about criteria for each stream:

For the short-term stream:

For the medium-term stream:

The core criteria which will apply to both streams:

How will these changes affect me?

Aside from the complete removal of the 457 visa from March 2018, the removal of 200 occupations from the STSOL came into effect from 19 April 2017. Depending on your migration status, this can have a significant effect on your future.

If you have been granted a Temporary Work (Skilled) Visa subclass 457 before 18 April 2017, the changes will have a limited effect on you.

If you are working towards permanent residency through an application for an Employer Nomination Scheme Visa subclass 186 (Temporary Resident Transition Stream), it is best to seek individualised advice regarding the effects of the changes to the STSOL and MLTSSL on that permanent visa.

If you were a dependant family member and hold a 457 as a secondary visa holder and you are no longer financially dependent, new age restrictions have come into effect from 19 April. These changes affect your ability to apply for a subsequent 457 visa as a secondary applicant if you are over 23 years old.

At the time of writing, nomination and visa applications for a Temporary Work (Skilled) Visa subclass 457 for an occupation that has been removed from the STSOL can be withdrawn without refusal. In some cases, you may be eligible for a refund of the fee.

If you are a bridging visa holder by reason that you have applied for a 457 visa and you suspect your occupation was removed from the STSOL, contact a migration lawyer immediately.

By far the largest group of those impacted by the announcement are prospective 457 visa applicants. If you were preparing to lodge a Temporary Work (Skilled) Visa subclass 457, it is important to ensure your position and nomination aligns to an occupation which is on the STSOL or MLTSSL. It is also important to act quickly to ensure all of your options are available to you.