In Tasmania, a successful negligence claim will satisfy the court of the following:

Understanding how the law of negligence applies in your particular case is important. For this reason, it is recommended that you seek legal advice if you believe you have been injured as a result of someone else’s negligence.

We operate on a no win, no fee basis. This means that if your compensation claims are unsuccessful, you will not be required to pay our fee.

If you have been injured in a car accident, there are two ways to claim compensation. If you can establish that your injuries were caused by the negligence of a driver and you were not wholly at fault, claims under both the Motor Accidents (Liabilities and Compensation) Act 1973 and the Civil Liability Act 2002 can be made.

Under the Motor Accidents (Liabilities and Compensation) Act 1973, compensation can be paid even if you were at fault. There are a large number of exclusions, such as the following:

This is not a complete list and it is important that you seek legal advice if you have suffered personal injuries as a result of a motor vehicle accident where you were wholly at fault. 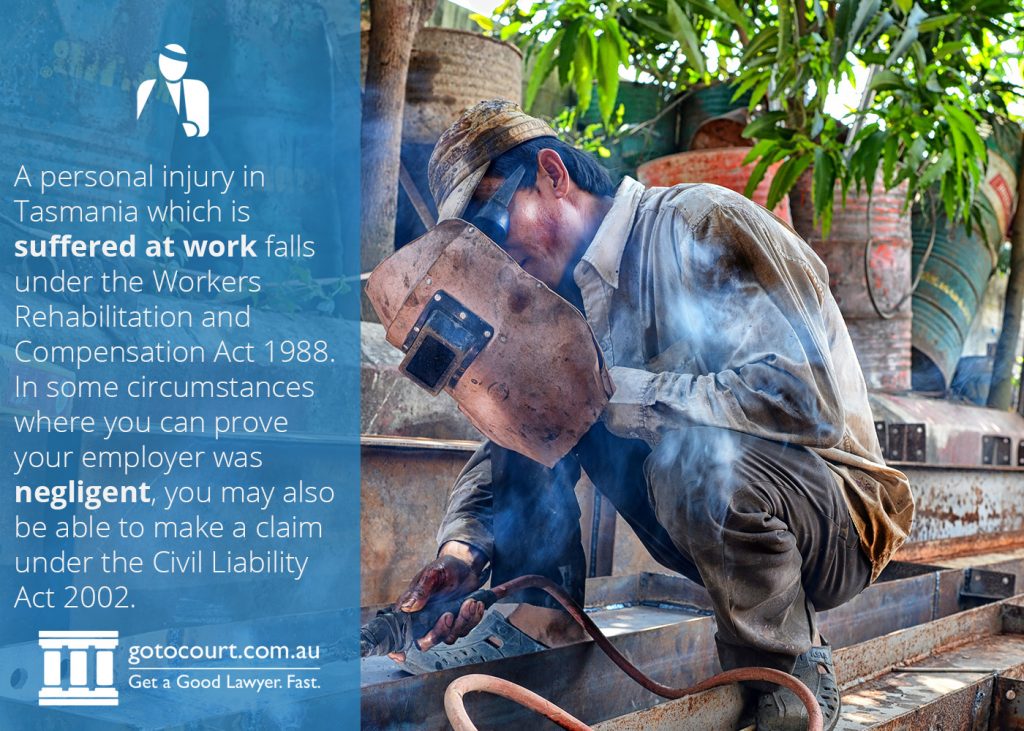 Under the Workers Rehabilitation and Compensation Act 1988, worker is given a special legal meaning. Worker includes the usual definition of employee as well as the following:

Other types of employment are excluded so it is important to seek legal advice if you believe you have a compensation claim to lodge with WorkCover Tasmania.

WorkCover Tasmania covers a range of injuries but injuries suffered in the following situations are not covered:

Diseases, including dust and asbestos related diseases, industrial hearing loss and cancer can also be claimed under WorkCover Tasmania. You must be able to prove that your employer and the work conditions were the most significant or major factor which led to your disease.

Industrial deafness claims are limited to deafness which has occurred since 16 August 1995 and where more than five percent of binaural hearing has been damaged or lost.

In some cases, where you can prove negligence on the part of your employer you can also make a claim for negligence under the Civil Liability Act 2002.

The main malpractice case law that is used in Australian medical negligence cases is Bolam v Friern Hospital Management Committee (1957) 1 WLR 582, which was later applied by the High Court of Australia in Rogers v Whitaker (1992) 175 CLR 479.

The legal principle from these cases is that doctors are required to behave in such a way which can be tested by reference of the medical profession. This means that doctors must act competently and apply their medical skill in the ways accepted by the profession at the time. These questions are determined by the courts.

A medical negligence case will arise in circumstances including the following:

Compensation on the ground of medical malpractice in Tasmania is awarded for medical expenses, pain and suffering and loss of income.