The law which covers compensation claims for personal injuries and loss in South Australia is covered predominantly under the Civil Liability Act 1936. For more specific cases of personal injury in SA, a statutory scheme under a different enactment of legislation may also apply.

If you believe you might have a claim for compensation as a result of an injury suffered from an accident, particularly if it was caused by someone else, it is important to seek legal advice. Go To Court Lawyers has a team of experienced and expert professional lawyers who will assess your matter and help you, every step of the way.

We operate on a no win, no fee basis. This means that if we think you have a claim and you are not awarded compensation, we will not charge our fee.

Personal injuries suffered as a consequence of a motor vehicle or car accident at the fault of someone else entitles the person suffering to claim compensation. In South Australia, compensation claims for car accident injuries are covered in both the Civil Liability Act 1936 and the Motor Vehicles Act 1959 under the state’s compulsory third party insurance scheme.

In both instances, a person making a claim must demonstrate fault of someone else to be successful. That is, the injury suffered must have been directly caused by the at-fault driver’s negligence.

If fault is proven, a claim for compensation for the following can be made:

Under the Motor Vehicle Accidents (Lifetime Support Scheme) Act 2013, there is a way to claim compensation if you are suffering from catastrophic injuries resulting in permanent disability without having to demonstrate fault. Catastrophic injuries include blindness, brain injury or paraplegia.

The Lifetime Support Scheme is no fault which means it allows for those suffering from serious injury access to limited compensation despite not being able to demonstrate fault in another driver (because, for instance, they were wholly at fault).

Exclusions and limitations apply and it is important to seek professional legal advice if you believe you have a claim.

Entitlements to compensation under the Return to Work Act 2014 include the following:

Worker is defined as an employee and in limited circumstances includes independent contractors, if they meet certain legislative criteria. 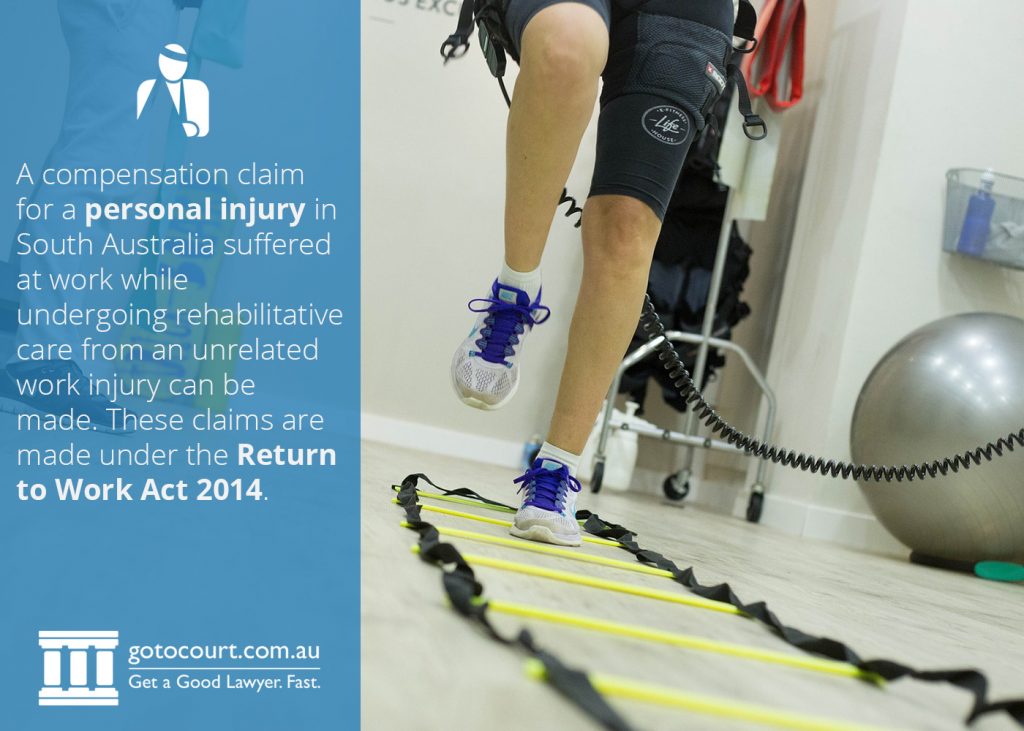 Section 7(5) of the Return to Work Act 2014 defines employment to include a range of work-related activities, including activities in the following circumstances:

Travel to and from work is excluded from the definition of employment activity.

Accidents on public and private property

In South Australia, compensation claims for injuries suffered as a result of an accident on public or private property is referred to as occupier’s liability. Occupier’s liability claims fall under the Civil Liability Act 1936.

Compensation can be claimed if it can be proven that an occupier had breached their duty of care towards someone on their property, and that breach directly resulted in injury.

Under the Civil Liability Act 1936, an occupier will not be liable for any injuries suffered by someone who was trespassing at the time of the accident. The exception to this is if the trespasser can prove that the occupier could reasonably foresee that the trespasser would be present on the property.

In these situations, both those who believe they have a claim as well as occupiers who think a claim will be made against them should seek professional legal advice.

For accidents which occur on roadways and footpaths, South Australian laws are more complex. Under the Civil Liability Act 1936, ‘road authorities’ cannot be held liable for injuries caused by a failure to repair or renew a road, or to maintain it.

A city council or local government, however, could be liable for injuries from accidents that resulted in misleading road signage.

In South Australia, compensation can be claimed for injuries resulting from an animal attack in a couple of ways. These include:

Under the Civil Liability Act 1936, compensation for injuries, damage and loss caused by animals are claimable. South Australian courts will look at the following factors to determine whether the negligence claim has merit:

Farmers who fail to keep their fences in good repair and allow their animals to roam will be held liable to pay damages for injuries caused to motorists.