Personal injury law in the ACT is often referred to as negligence. The Civil Law (Wrongs) Act 2002 regulates negligence claims in the ACT.

To claim compensation for a personal injury, you must be able to prove to the court the following:

In the ACT, time limits apply under the Limitation Act 1985. You have three years to lodge your personal injury claim in the ACT.

If you believe you have a negligence case or you have been injured and are unsure of what to do next, it is important to speak with a lawyer. As your particular circumstances may change what benefits are available to you, getting sound and professional legal help is important. 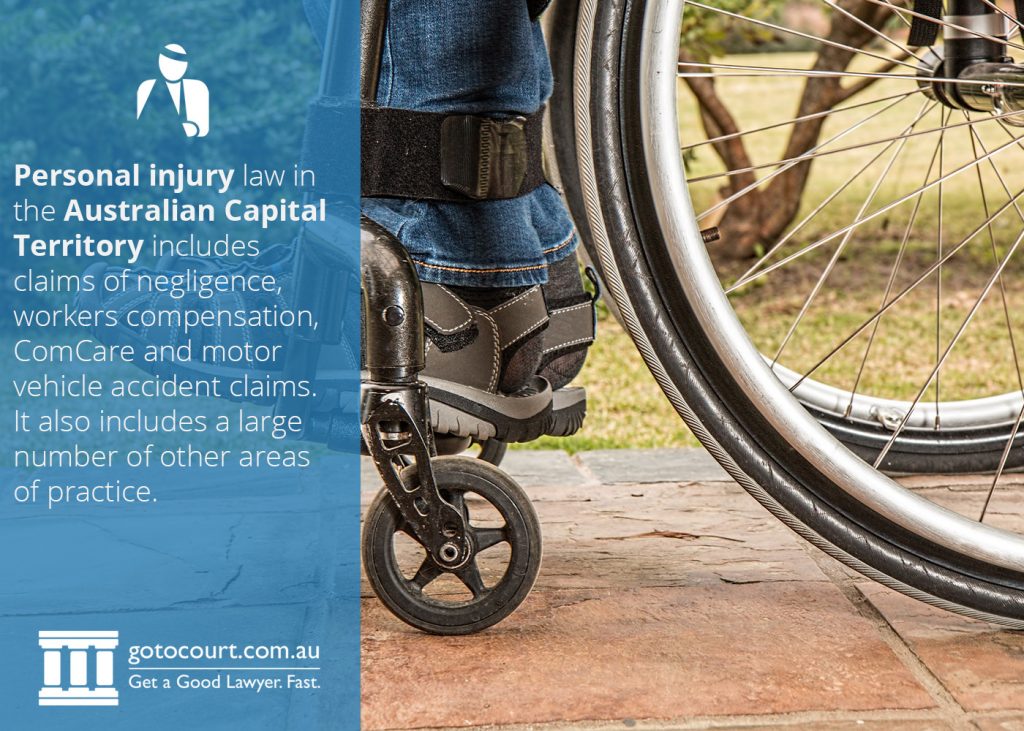 There are a number of different ways to claim compensation for a workplace injury in the ACT:

Under the Workers Compensation Act 1951, a claim can be made with Access Canberra for the following benefits and compensation pay-outs:

For those who are suffering from workplace-related deafness, you can make a claim with Access Canberra. You must establish that more than six percent of your binaural hearing has been lost as a result of employment activities. Age is also factored in when determining a claim of hearing loss.

Claims for compensation or benefits under ComCare can be made if you suffered injury in either of the following situations:

Claims for diseases suffered as a consequence of work conditions, including psychological illness, can also be made. To be successful, your employment must have significantly contributed to your disease.

There are a number of exceptions to ComCare compensation benefits where payments would not be made. These include:

Reasonable administrative action includes performance appraisals, counselling, suspension of employment, disciplinary action, and anything done in connection with your failure to be promoted, transferred or obtain benefits.

ComCare pays compensation for injuries which result in death, incapacity and impairment. There are a number of other damages which can be claimed under the Safety, Rehabilitation and Compensation Act 1988 (Cth).

As your particular circumstances may be different, it is important to consult a lawyer if you have been injured at work or are considering a ComCare claim.

There are different rules which apply to public liability personal injury claims in the ACT. These depend on whether a government or governmental agency was at fault or if the negligent party is a private occupier (such as an individual).

Compensation is awarded for public liability claims in the following circumstances:

When you are harmed as a result of a good or product malfunction, you are entitled to compensation. In these cases, both the Civil Law (Wrongs) Act 2002 and the Australian Consumer Law (under the Competition and Consumer Act 2010) will apply.