Consumer transactions that were entered into before 1 January 2011 remain covered by ACT laws which existed at that time, namely the Fair Trading Consumer Affairs) Act 1973 and the Fair Trading Act 1992. 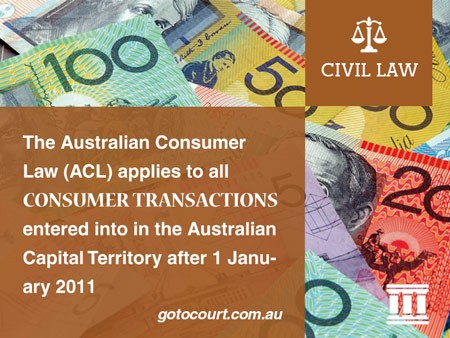 The Competition and Consumer Act 2010 (and therefore the ACL) was enacted by the Commonwealth government and for constitutional reasons applies to constitutional corporations.  All States and Territories – including the ACT – enacted legislation to incorporate the provisions of the ACL into State and Territory law so that it applies to all consumer transactions.  This reduces the number of laws and obligations that must be complied with by businesses operating throughout Australia as they now have the same fair trading obligations where ever they are.

The ACL covers unfair contract terms in standard form consumer contracts and also sets out the rules that cover unsolicited consumer agreements for telephone and door to door sales and lay-by agreements. It guarantees certain consumer rights when buying goods and services and overseas, and a national product safety law and enforcement system which includes options for penalties and consumer redress.

The Office of Regulatory Services

In the ACT the Australian Consumer Law is enforced by the Office of Regulatory Services. ORS Fair Trading is comprised of Compliance and Enforcement Officers and the Advice and Complaints team and has responsibility for enforcing a wide range of legislation. This is done by identifying and investigating breaches of legislation, providing education programs, the advising of licencees and traders, and the provision of advice and information to consumers and dealing with their complaints.

ORS can deal with disputes concerning motor vehicles, fitness and gym services and memberships, renovating and building, the sale or purchase of property, problems with owners corporations,  retirement villages,  frauds and scams, product safety issues, licensed premises, security services and smoking in enclosed public places and outdoor cafés. They have jurisdiction in respect of complaints or claims by any consumer who resides in the Australian Capital Territory (no matter where the business is) or in disputes with a motor vehicle seller or repairer that operates in the ACT that are made by consumers living outside of the ACT. There is a telephone enquiry line or email service available to provide information and advice on how to resolve a dispute and information regarding the rights and obligations of consumers and businesses.

In the first instance, the trader who sold the product must attempt to help to resolve the dispute with the consumer. If it can’t be resolved, the ORS can attempt to conciliate the dispute. They will speak to the business, identify the issues in a dispute and look for options for a resolution. If a resolution can’t be found, ORS will provide other options for the consumer. These options could include taking the complaint to a court or a consumer industry complaint tribunal.

The ACT Civil and Administrative Tribunal has jurisdiction to hear complaints regarding the provision of goods and services, which may include recovery of the value of goods or recovery of goods. ORS Fair Trading will prioritise the claims of non-compliance and complaints received so that the most critical complaints are the first to be investigated. This may mean that limited action is taken on a complaint that is considered to be a low priority.

There are various options open to resolve breaches of the ACL. The OFT or the Australian Competition and Consumer Commission (both are regulators) can declare that a term in a standard form consumer contract is unfair and therefore can’t be enforced. If a trader thinks that they may have contravened the Act, they can offer the regulator an undertaking that they will put a system in place to ensure it doesn’t happen again. If it is accepted, the undertaking will be enforceable by a court.

A regulator can also send a notice to a business seeking information about representations or claims they have made to determine whether any further investigation is required. If the trader does not reply to the notice, or if a regulator considers that the trader has contravened the Act, the regulator can then ask the court to authorise a public warning notice.

A regulator can also ask a court to make an order to redress any harm suffered in the community as a result of a breach, or for the issue of an adverse publicity order against a trader, or for an order disqualifying a particular person or persons from managing a corporation. On the application of either a regulator or an affected consumer, the court can issue an injunction to stop a business from behaving in a way that breaches the Act. If the actions of a trader cause damage or loss to a consumer then either the consumer or a regulator can apply to the court to recover damages, refunds or compensation.

The ACL creates penalties breaches of certain provisions of the Act with penalties that include orders for compensation, fines and criminal convictions.