Administrative review in the ACT refers to the review by a third party tribunal of government administrative decisions.

The ACT Civil and Administrative Tribunal (‘ACAT’) is responsible for reviewing administrative decisions made pursuant to legislative powers bestowed on by government departments and officials in the Australian Capital Territory. It was established as a ‘super tribunal’ in 2008 under the ACT Civil and Administrative Tribunal Act 2008, meaning that it was the consequence of the amalgamation of a number of smaller tribunals, and was one of the first so-called super tribunals to be established in Australia. 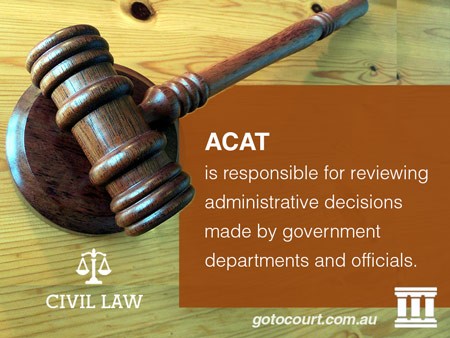 Unlike the super tribunals in South Australia and the Northern Territory which only started operating in the last year, ACAT started operating in 2008. This has resulted in it having a much broader jurisdiction to merits review of government decisions, encompassing administrative decisions made under over 100 different pieces of legislation, known as authorising laws. For example, ACAT reviews State taxation decisions made under the Duties Act 1999 and the Taxation Administration Act 1999. It also deals with FOI claims under the Freedom of Information Act 1989, and issues such as changes of name under the Births, Deaths and Marriages Registration Act 1997.

A full list of the legislation under which it has been granted jurisdiction, including ‘original jurisdiction’ (ie it considers applications before any other government body) can be found on the ACAT website.

Making an application for merits review

To request a merits review of a decision, you must fill out and lodge the correct form with ACAT. However, not everybody can apply for a review of an administrative decision. Who can apply is explained in each of the authorising laws to which the claim relates.

For example, if an application is made in relation to an FOI claim under the Freedom of Information Act 1989, that Act states that the person seeking access to a document must make an application to ACAT within 28 days of the ombudsman refusing their request (subject to rules about seeking an internal review). The Freedom of Information Act 1989 also stipulates what kinds of powers ACAT has on such an application. For example, if a document cannot be accessed under the Act because it is ‘exempt’, ACAT cannot grant access. Otherwise, it can generally make any changes to the decision made.

The onus is on the government department to show that its decision was justified. Once the decision is made, under the ACAT Act 2008 the Tribunal must give notice of the decision to people who are affected by it. A reasons statement, which sets out the Tribunal’s reasons for its decision, must also be given.

A decision by the Tribunal can be appealed internally on a question of fact or law. However, it cannot be appealed for a further merits review. The appeal will then be heard by an appeal tribunal, which may be constituted by one or more Tribunal members.

The ACT is one of the only jurisdictions to have codified the rules relating to judicial review, which means looking at a decision to determine whether it was lawfully made. Most other jurisdictions in Australia rely on the common law. These rules are found in the Administrative Decisions (Judicial Review) Act 1989.

Only ‘eligible persons’ can apply to the Supreme Court for judicial review. Who is an eligible person depends on the legislation pursuant to which the original decision was made, but can include a corporation or an unincorporated association.

For most kinds of decisions, the Supreme Court will also only hear the judicial review application if it raises an issue of public importance. The grounds for the application must also be set out which, for example, may include any of the following:

The Supreme Court may then make one of a number of orders, including certain common law writs such as a writ of mandamus (requiring somebody to perform a duty they have not performed) or certiorari (ie an order setting aside a decision).