‘Restraint of trade’ in the ACT is the term given to a written clause in a contract, which has the effect of restraining one of the parties to the contract from engaging in activity which may be in competition with the other party.  Restraint of trade clauses typically appear in contracts for the sale of a business, or in an employment contract, and in the latter case are intended to have the most effect after the employment relationship has been terminated.  Restraint of trade in the ACT is governed by the common law. 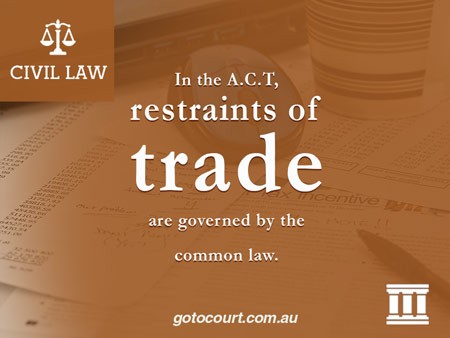 The validity of restraint of trade clauses

The laws regarding restraint of trade in the ACT have evolved through the common law (case law) and, in most States and Territories with the exception of New South Wales, are not embodied in legislation.  Under the common law, restraint of trade clauses are generally presumed to be invalid or void for public policy reasons – generally because they are designed to restrict a party’s ability to trade or be gainfully employed.

Over time, however, restraint of trade clauses have become more entrenched in employment contracts in particular, and have been declared valid if they go only so far as to protect one of the party’s ‘legitimate business interests’.  What is meant by a legitimate business interest will depend on a number of circumstances, including (in the situation of an ex-employee):

A restraint must not go further than what is reasonably necessary to protect the legitimate business interests of the party who is restraining the other party (in the case of an employment relationship; the employer).  Otherwise, it might be declared invalid or void.  What is reasonable will always depend on the individual case.

In order to get around this uncertainty, employers will often write into a contract a clause known as a ‘cascading restraint’.  This clause is written in such a way that the geographical area and duration of the restraint starts out quite wide, and is gradually narrowed down.  The clause will stipulate that the Court has the discretion to determine which of the restraints is the most reasonable.  This has the benefit of meaning that the entire clause will not be declared invalid, just the restraints which are considered unreasonable.

Clauses relating to restraint of trade in the ACT use common terms to restrain one of the parties (usually the employee) from engaging in certain activity.  For example, a clause may stipulate that an employee may not ‘solicit’, ‘canvas’ or ‘secure’ clients or former clients.  ‘Solicit’ has a generally accepted meaning of actively going out to attract clients, whereas ‘secure’ has been held to enlarge substantially the scope of the restraint beyond mere soliciting or canvassing, and include actions which may not have been stimulated by the vendor/employer but which resulted from the initiative of the customer/client.

When reviewing the restraint of trade clauses in an employment contract or a sale of business contract, you ought to consult a lawyer to determine what the scope of the restraint is, based on the legal definitions of particular words which are commonly used in restraints.

Relief for breaches of a restraint of trade in the ACT

If an employer or a seller suspects an employee or purchaser respectively of breaching a restraint of trade clause, they may seek relief by way of an injunction to prevent continuing breaches or compensation for a loss of profits.  To seek this relief, they must commence proceedings in the Supreme Court of the ACT. In support of any application they must bring evidence of the loss of profits, together with details of the clients and/or customers who have been poached by the employee.