Laws regarding debt recovery procedure in the ACT 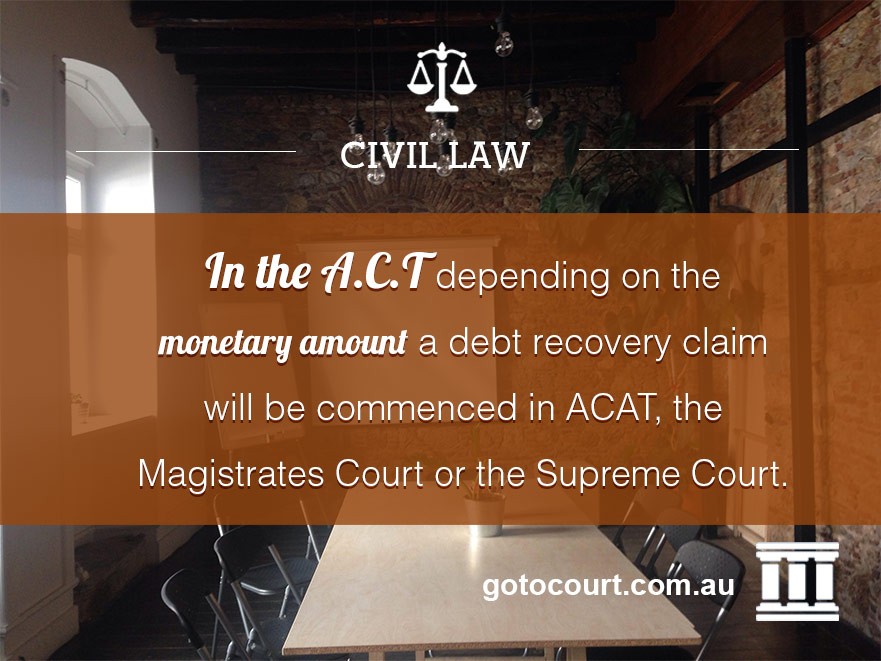 Before starting debt recovery action the creditor must send a letter of demand to the debtor setting out the claim and asking for a response within a certain timeframe, and advising that if the debtor fails to do so the creditor reserves the right to commence legal proceedings. This gives the other party a chance to sort things out and may resolve the matter without the need for litigation.

A claim must be filed at the appropriate Court or tribunal within 6 years from the date on which the debt arose (with some exceptions which are set out in the Limitation Act 1985 ). The laws that govern claims in the ACT are the Magistrates Court Act 1930, the Supreme Court Act 1933, the ACT Civil and Administrative Tribunal Act 2008, Civil and Administrative Tribunal Procedural Directions 2010, Court Procedures Act 2004, and the Court Procedures Rules 2006.

For proceedings commenced in the ACT Civil and Administrative Tribunal, the person making the claim is called the Applicant (this will be the creditor) and the person that the claim is against is called the Respondent (the debtor). Both may be represented by a lawyer, although in most cases no legal costs are awarded to either party. When a claim is filed, a copy is sent to the Respondent with a Response form which must be returned within 21 days. If the respondent does not respond the applicant can request that ACAT make a default judgment. If the respondent does respond, the parties will be called in for an informal conference or mediation to try to settle the claim.

If the matter does not settle at an informal conference or mediation, it will be listed for a hearing which is designed to be as simple, quick, and informal as is possible. Once a judgment is given, it must be registered in the Magistrates Court for enforcement. The rules for enforcement are then the same as for judgments from the Court.

The procedure for both the Magistrates Court and the Supreme Court is set out in the Court Procedures Act 2004, and the Court Procedures Rules 2006. Debt recovery claims in both Courts start with the creditor filing an Originating Claim and a Statement of Claim and serving both on the debtor. The creditor is known as the Plaintiff and the debtor is the Defendant. After being served with the documents, the Defendant has 28 days to file either a Notice of Intention to Respond or a Defence. The Court Procedures Rules 2006 specifically state that if you are a Defendant to a debt recovery claim, it is not sufficient in a Defence to simply deny the debt, you must specifically deny the alleged facts giving rise to the debt.

The parties are ordered to attend a pre-trial conference, at which a Registrar of the Court will review the facts and try to narrow down the issues in dispute and/or settle the matter. If it is not settled, the matter will be set down for a hearing. Once there is a judgment, either after hearing or by default, enforcement action can be taken.

An enforcement hearing subpoena may be issued. The enforcement hearing subpoena is a summons for the judgment debtor to appear before a Court to answer questions regarding his or her financial status of the debtor, including sources of income and assets and liabilities. Any information may then be used for a seizure and sale order or a redirection order. A seizure and sale order directs a Sheriff’s Officer to seize goods belonging to the debtor and auction them to recover money owed to the creditor. A redirection order is an order directing any earnings such as salaries, wages, bank accounts or commissions to be redirected to the creditor for payment of the debt.