All employees in the Australian Territories, regardless of whether they are employed in the public or the private sector, are covered by the national workplace relations system under the Fair Work Act 2009.  Therefore, if you are employed in the ACT and believe your employer has dismissed you unfairly, you can make a claim of unfair dismissal to the Fair Work Commission. 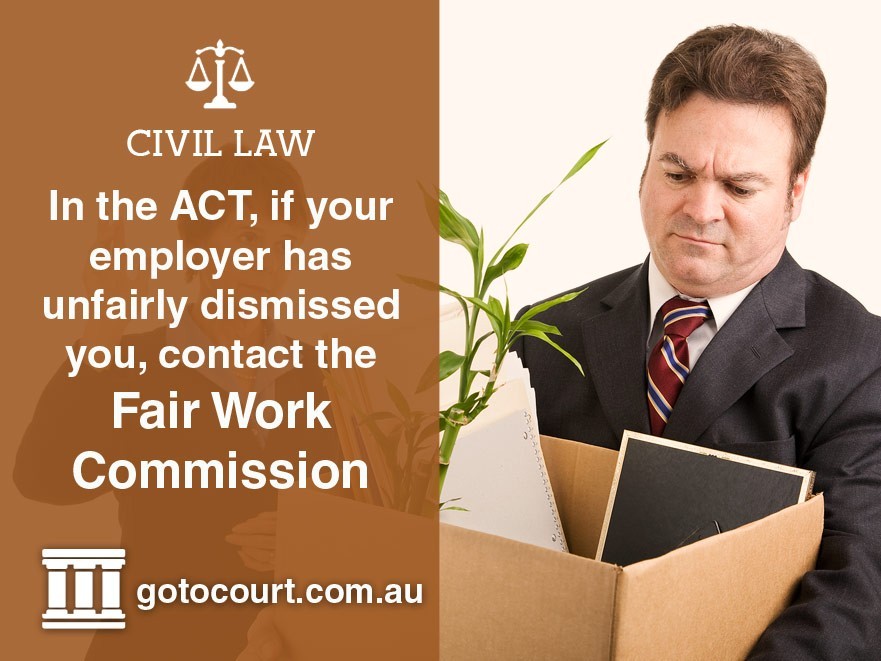 What is ‘unfair dismissal’ in the ACT?

The Fair Work Act 2009 defines ‘unfair dismissal’ as any dismissal from employment that is harsh, unreasonable or unjust and is not a genuine redundancy. For small business employers (ie businesses with less than 15 employees), a dismissal may be unfair if it was not done in compliance with the Small Business Fair Dismissal Code.

For the purposes of the unfair dismissal laws, you can be ‘dismissed’ by having your employment terminated, or if you resign under pressure because of your employer’s behaviour.  It is important to note, however, that if you resign because of your employer’s conduct you will need to demonstrate that the resignation was effectively forced or that you had no alternative but to resign.  Otherwise, the presumption is that you resigned – and weren’t dismissed – and you will need to prove that you are not excluded from unfair dismissal laws.

The Small Business Fair Dismissal Code provides guidance to small business owners on when a dismissal is justified; for example, summary dismissal for theft.  Common scenarios where an employee may be unfairly dismissed include:

What is not an unfair dismissal in the ACT

You are excluded from bringing a claim of unfair dismissal in the ACT if you resign, except in situations where you had no other alternative, or you were forced to resign.

You will also be excluded from bringing an unfair dismissal claim if your dismissal is due to a ‘genuine redundancy’.  A dismissal will be a genuine redundancy if your job is no longer required to be performed by anyone, and your employer complied with any obligations it has under an award or enterprise agreement regarding consultation and redeployment prior to making the dismissal.

It is not a ‘dismissal’ if you are employed for a fixed period and that period ends without your employment contract being renewed.

Eligibility to bring a claim of unfair dismissal in the ACT

Only certain kinds of employees can bring an unfair dismissal claim before the Fair Work Commission.

Firstly, you must have completed a continuous period of service with your employer of at least 6 months (or 12 months if the employer has less than 15 employees).  Your annual earnings must be less than the threshold of $133,000, or alternatively if your earnings are above that amount you must also be covered by an award or enterprise agreement.  The income threshold excludes compulsory superannuation contributions and reimbursements.

Generally, applications for unfair dismissal claims must be lodged with the Fair Work Commission within 21 days of the dismissal, unless the Commission allows you to apply late because there were exceptional circumstances why you could not comply with that timing.

If conciliation is unsuccessful, a member of the Fair Work Commission will hold a conference or an arbitration hearing to resolve the dispute.  Conferences are generally private while hearings are held in public. The Commission will let you know which applies to your application by issuing you with a ‘Notice of Listing’.

You will require permission to be represented by a lawyer at the conference or hearing if they are not from a union.  You can also give evidence to the Commission in the form of witness statements.

The Commissioner overseeing the conference or hearing is required to decide whether your dismissal was harsh, unreasonable or unjust.  In making this decision, a number of factors must be taken into account.  These include but are not limited to:

The Commission may order that your claim be dismissed if they do not find that the dismissal was unfair.  If the Commission does consider your dismissal to be unfair, it may order that you be reinstated in your job and receive back pay, or that you be paid financial compensation (the maximum amount of which will usually be the equivalent of 26 weeks’ remuneration or, if your earnings are more than $133,000 per annum, half of that amount).  The maximum compensation amount is rarely awarded.

If you make a claim of unfair dismissal in the ACT and it is unsuccessful, you cannot appeal the decision of the Fair Work Commission unless it grants you the right to do so.  It will only do so if it considers it to be in the public interest to let you appeal the decision.