Workers may also be covered by the federal Fair Work Act 2009, which contains anti-discrimination provisions at section 351.  If the discriminatory conduct results in termination of employment, a claim must be brought to the Fair Work Commission within 21 days of the date of dismissal. 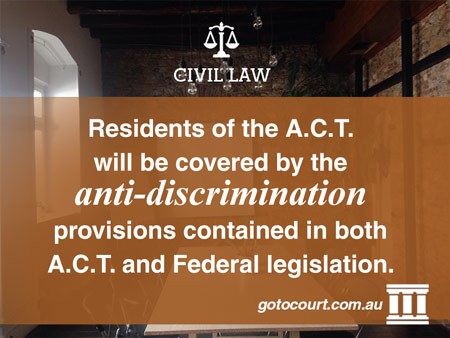 Why two sets of laws in the ACT?

The ACT enacted the Discrimination Act 1991 under its general residual power to legislate in relation to its own territory.  To the extent that there is no inconsistency between the legislation, they can co-exist and apply to Territorians at the same time.

Across the States and Territories, the kinds of attributes on which unlawful discrimination can be based are quite similar.  Sex, age, pregnancy, religion, race, disability, gender identity, parental or carer’s status, political conviction and industrial activity are all attributes which are protected in the Anti-Discrimination Act and reflected in legislation in other States and territories.  The Anti-Discrimination Act also prohibits discrimination based on profession, trade, occupation or calling; this has a wider scope than the prohibition of discrimination based on lawful sexual activity (which is intended to cover sex workers).

Discrimination is defined under section 8 as being where a person treats or proposes to treat a person unfavourably based on a particular attribute, or alternatively, where a person imposes or proposes to impose a condition or requirement on someone with which that person can’t comply due to their particular attribute.  The latter kind of discrimination is known as indirect discrimination.  Where a tribunal or Court is required to consider if indirect discrimination has occurred, it must give consideration to the extent and nature of the disadvantage, and the feasibility of mitigating or overcoming the disadvantage. It must then weigh the disadvantage against the advantages of the outcome which is sought.

A person may be discriminated against if they did have a particular attribute, but do not have it any longer.  Discrimination may also occur if a person is presumed to have a particular attribute (even if they don’t), or if the less favourable treatment is on the basis of someone having a characteristic which a person with a certain attribute has or is presumed to have.  For example, the need to frequently express milk is a characteristic that is presumed of women who have been pregnant and are, or may be, breastfeeding.

Who is covered against workplace discrimination in the ACT?

Discriminatory conduct does not have to occur in or at the place of work in order to be unlawful and therefore actionable.  Workplace discrimination in the ACT, as well as related discriminatory harassment, can occur at work-related events and functions, including site trips or during travel.

How to make a complaint under the Anti-Discrimination Act 1991

The Human Rights Commission Act states that, with respect to the receiving of complaints under that legislation and under the Discrimination Act, its general principles require:

A complainant has 60 days from the date of a statement being issued to him or her stating that the complaint is dismissed, to request that the matter be referred to ACAT.

ACAT is given jurisdiction to hear and determine referred complaints under Division 4.2A of the Human Rights Commission Act 2005.  That division, and the ACT Civil and Administrative Tribunal Act 2008, contain the laws governing the procedures of the tribunal when hearing complaints.  ACAT proceedings are conducted less formally than those in the courts. It is not bound by rules of evidence, making it more flexible.

ACAT may refer parties to mediation if it considers it appropriate.  Parties will usually be ordered to attend directions hearings to determine the conduct of the matter, including how evidence is to be presented.  Following a hearing, if it is determined that the claim of workplace discrimination in the ACT is substantiated, ACAT is given the power to make an order that the perpetrator stop the discriminatory conduct, as well as making any order necessary to compensate a the aggrieved person for loss and damage.