In the ACT, workplace bullying is any kind of persistent verbal, psychological, physical, or social abuse by either an employer or a worker, against another person or group of people in a workplace. It includes any unwelcome behaviour which is offensive, insulting, degrading, humiliating, intimidating, frightening or threatening. It can include subtle behaviours such as deliberately leaving a person out of workplace or work social activities, setting timelines or deadlines that are very hard to achieve, or refusing a person’s leave application even though they are eligible for it.

Workplace bullying may also include more serious criminal behaviour such as damage to property, or physical or sexual assaults. If an employee or an agent of an employer commits bullying or harassment in the workplace, the employer may be held vicariously liable for that conduct, unless the employer can demonstrate that they took all reasonable steps to prevent the employee or agent’s behaviour. 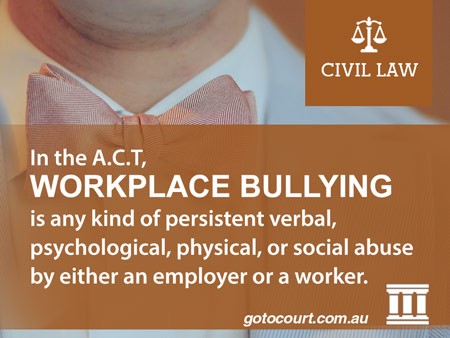 All employees in the ACT are covered by the anti-bullying provisions contained in Part 6-4B of the Fair Work Act 2009 (FW Act) which entitle workers to bring an application to the Fair Work Commission for an order to stop the bullying.  An application can be made by any worker, which includes volunteers, subcontractors and contractors.

The FW Act defines bullying as repeated behaviour towards an individual which poses a risk to his or her health and safety.  The Fair Work Commission does not, however, have jurisdiction to make orders for compensation for loss or damage suffered by a worker who has been bullied.  This remains within the ambit of worker’s compensation legislation in the ACT.  Lodging a complaint with the Fair Work Commission does not stop the worker from pursuing other legal rights.

Under the Work Health and Safety Act 2011, an employer must take every step reasonably possible to eliminate or minimise any risks to the health and safety of their workers. One of the main considerations in deciding what might be ‘reasonably practicable steps’ is the seriousness of the risk to the worker. Bullying and harassment in the workplace can pose quite serious risks to an employee’s safety and/or health, and therefore employers must do everything they reasonably can to stop and/or minimise the effects. Failure to do so could be a breach of the Act and the employer could, in some circumstances, be liable to prosecution.  Workers also have a safety duty under the Work Health and Safety Act 2011 to not expose themselves or other people to work safety risks.

For public servants, the Public Sector Management Act 1994 sets out standards of conduct for public sector employees. This includes, under section 9, a duty not to harass any other employees.  There is a responsibility on all managers to provide a safe working environment, and employees have to comply with all other workplace laws.

If an employer does not take all reasonable steps to prevent workplace bullying and harassment then a complaint can be made to WorkSafe ACT. If an employee has suffered an injury (physical or psychological) because of bullying they may be able to lodge a claim under the Workers Compensation Act 1951. Workers employed by the Commonwealth may be entitled to claim for workers compensation under the Safety, Rehabilitation and Compensation Act 1988.

Bullying and harassment by an employer could also be discriminatory conduct if it means a person is refused a job or loses a job, is denied a training opportunity or a promotion or is given less favourable working conditions or terms of employment on the basis of a protected attribute such as race, sex, age and disability. An employee should try first try to solve the problem by speaking to the complaints (grievance) officer, the head of the organisation or its human resources department.  Employees are entitled to ask their trade union to help.

If the problem is not fixed, then a complaint can be lodged with the federal Australian Human Rights Commission or the ACT Human Rights and Discrimination Commissioner.

An employee may have a claim for breach of contract depending on the wording of their employment contract and employer policies. For instance, if the employer has a policy setting out how it will address workplace harassment and bullying and doesn’t follow the procedures under the policy the employee may have a claim. Breach of contract claims must be commenced within six years of the breach.

Some forms of bullying may be a criminal offence under the Crimes Act 1900, including bullying that is violent or includes any sort of unwanted touching, or is threatening or is harassing. This can be reported to the police for them to consider if the perpetrator should be charged. The victim may also consider taking out a Personal Protection Order under the Domestic Violence and Protection Orders Act 2008 for protection against further bullying.