Consumer Claims in WA are regulated mainly by the Australian Consumer Law, which forms part of the Commonwealth Competition and Consumer Act 2010.  This Act came into effect at the beginning of 2011 and replaced the former Trade Practices Act 1974.

The Competition and Consumer Act 2010 only applies to constitutional corporations, due to the fact that the Commonwealth has restricted powers under the Constitution to legislate regarding certain matters.  Consequently, many States, including Western Australia, have enacted legislation to incorporate the provisions of the Australian Consumer Law into Western Australia law.  The legislation relating to Consumer Claims in WA is the Fair Trading Act 2010. 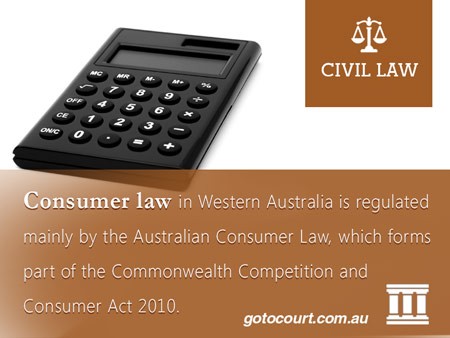 Where to start: The Competition and Consumer Act 2010 or the Fair Trading Act 2010?

If you are a consumer of goods or services and have a dispute with the person or entity that provided those goods or services to you, you may either bring a claim to the Australian Competition and Consumer Commission or the Office of Consumer Protection in Western Australia, which is part of the Department of Commerce.

Unconscionable conduct under the Australian Consumer Law, as relating to consumer claims in WA, is an extension of the concept of unconscionable conduct found in equity.  If one party has an advantage over the other (usually bargaining power, in the case of the seller) and uses that in a manner which may coerce the other party, unduly influence him or her, or place him or her under duress, then that conduct may be unconscionable.

If you are a consumer of goods and services and believe that the person or entity has engaged in either misleading or deceptive conduct, or unconscionable conduct, you may be able to bring a claim to Consumer Protection.  You may also have grounds for bringing an action (litigation) against the other party.

Unfair terms are those which would cause a great imbalance between the parties where one party has the most bargaining power, and which have the potential to result in a significant financial cost to the party with the least bargaining power.

The role of the Commissioner of Consumer Protection in WA

Under Part 5 of the Fair Trading Act 2010 the Commissioner for Consumer Protection is given a number of functions with regard to the administration of the Act, including receiving and investigating complaints from consumers, regulating licensing under the Act, and publishing statements about products which have been determined as unsafe or unfit for purpose.

The Commissioner is also given the power to institute or defend proceedings on behalf of a business where the amount in question is less than $100,000 and if the matter involves an issue of public interest.

Complaints and Consumer Claims in WA

If you have a dispute in relation to goods or services supplied to you, you ought to firstly attempt to address the issue with the person who supplied you with those goods or services.  If this is impossible or is unfruitful, then you may wish to lodge a complaint with the Commissioner for Consumer Protection.  Consumer Protection will attempt to conciliate or investigate the complaint within 10 days of receiving it.

If conciliation is unsuccessful and you wish to seek compensation or specific performance of a contract (ie, an order that the other party make good on their promises under a contract), then you may wish to commence a Consumer/Trader claim with the Magistrates Court of WA.  If the amount of the claim is less than $10,000 it can be commenced in the minor cases division, otherwise it must be commenced in the general proceedings division.  For any claim which exceeds the civil jurisdictional limit of the Magistrates Court, proceedings will need to be commenced in the District Court (for claims of between $75,000 and $750,000) or the Supreme Court (for claims exceeding $750,000).