You are covered by the Fair Work Act 2009 (“FWA”) if you are employed by “national systems employer”.  This includes a constitutional corporation (which is defined as a foreign corporation; or a trading or financial corporation formed within the limits of the Commonwealth) or the Commonwealth government.  If you are not employed by a national systems employer however are employed in Western Australia, then you are likely covered by the Industrial Relations Act 1999 (“the IR Act”). 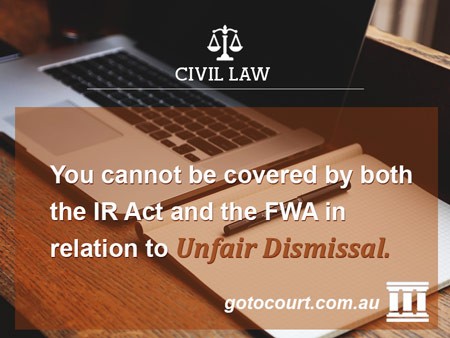 Who is covered by the Industrial Relations Act 1999?

The IR Act covers anyone in Western Australia who is not employed by a national systems employer.  This includes anyone who is employed in the public service or otherwise employed by the WA government, and people who are employed by private entities which are not corporations. This includes employees of sole traders, incorporated associations or trusts or partnerships.

What is an Unfair Dismissal in WA?

The WAIRC may be also be guided (but not bound) by prior decisions of the WAIRC in determining what is harsh, oppressive or unfair.  Matters which have been taken into consideration in prior decisions include: if the matter is performance-related, whether the criticism was justified and whether person was given the opportunity to rectify the problem; if it is related to misconduct, whether the employee was notified of the misconduct; and the manner in which the dismissal was effected. There will not be an unfair dismissal if the person is employed for a fixed term and the period of employment expires, or if it is not renewed. The WAIRC may order that the employee be reinstated and/or may make an order that the employer pay damages to the employee not exceeding the equivalent of six months’ wages.

The WAIRC website contains a fact sheet guide to unfair dismissals. An unfair dismissal claim must be made to the WAIRC within 28 days of the termination of employment, however the Commission has jurisdiction to allow an application to proceed out of time if it believes that not doing so would be unfair.  An employer has the opportunity to respond by way of a Notice of Answer to the complaint. The matter is usually referred to an informal conciliation conference, where the parties are given an opportunity to state their cases and to explore the possibility of resolving the matter.  If the matter is not resolved by conciliation it may be referred to a hearing.

The IR Act states that the WAIRC must act in good conscience, according to equity, and have regard to the substantial merits of the case.  It is not required to observe strict legal technicalities or legal forms, and in that regard it is not bound by formal evidentiary rules.

What are the remedies for an unfair dismissal?

If the WAIRC determines that the dismissal was unfair, then it may either reinstate the employee or order that the employer pay compensation for “loss or injury” to the employee of up to the equivalent of six months’ remuneration.

How are the WA Industrial Relations Act 1999 and the Commonwealth Fair Work Act 2009 different?

It is important to understand that you cannot be covered by both the IR Act and the FWA in relation to unfair dismissal.  The first obvious difference is the language: the IR Act refers to a dismissal which is “harsh, oppressive or unfair” whereas the FWA describes a dismissal which is “harsh, unjust or unreasonable”. Two other significant differences are: firstly, that under the IR Act employees have 28 days to lodge a complaint whereas under the FWA employees only have 21 days to do so, and secondly, that the Fair Work Commission is bound by the legislation to take into consideration a number of factors in determining “harshness”.