Under the Family Law Act, moving the children to another town, city, state or country is known as relocation. If a parent moving will limit the time the children get to live with or spend with the other parent or another significant person in their lives, a court may not give permission by way of Relocation Orders. If your children primarily live with you and you need to relocate, you should first talk to the other parent. You may be able to reach agreement that the children spend longer periods of time in school holidays or have longer visits at other times during the year with their other parent.

If you can agree, it is best to enter into a written parenting plan or to apply to the court for consent orders before you move. If you move without a court order or without the consent of the other party, a court may order you to return until it has considered the case. If there are relocation orders in place, moving may breach the order and the other parent may apply to enforce the order. 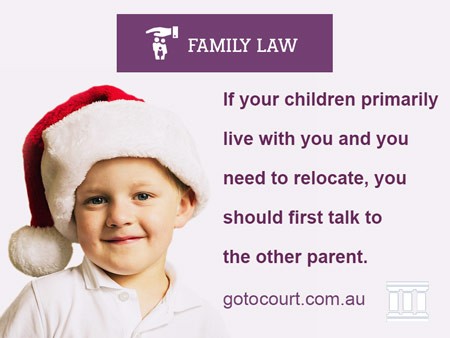 The Court will balance the rights of the relocating parent with the following considerations, while bearing in mind that the final decision must be what is in the best interests of the child:

Every time a parent wishes to take the children overseas they must get the other parent’s permission. An Australian passport can only be issued for a child with the written consent of each person who has parental responsibility for a child.

If you are planning an overseas holiday you should tell the other parent (and any other person with parental responsibility) as soon as possible. You should give them full details of where you will go and include contact numbers.

If written consent is given by all parties with parental responsibility, a passport application can be lodged as normal. If it is not, you can make a written request to the Approved Senior Officer of the Department of Foreign Affairs and Trade to consider issuing the passport due to special circumstances. If they refuse you can apply to the Court for an order permitting a child to travel internationally. The Court will only allow the child to travel internationally if it decides it is in the best interests of the child.

If you are concerned that a child may be taken out of the country, you can: