Trespass in the ACT is considered a civil dispute or tort. This means you can sue and be sued for trespass, and the court must be satisfied on the balance of probabilities that the trespass occurred.

A trespass is also known as ‘actionable per se’. This means that you do not have to prove any damages were caused by the trespass. This is different to a nuisance claim which is a continued but unintentional activity that interferes with the normal enjoyment of the property. A nuisance requires proof of the damage incurred by the activity before you can sue. 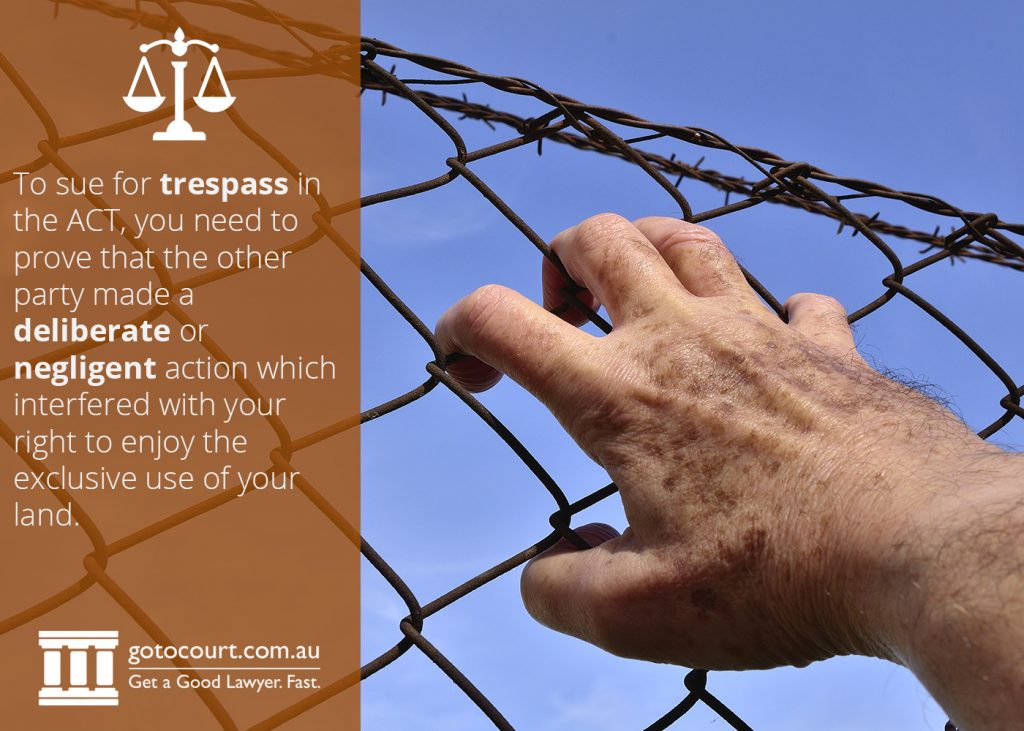 When does trespass occur?

Trespass involves a deliberate or negligent action which interferes with a person’s right to enjoy the exclusive use of their land, including their house and yard. For example, if your dog escapes and runs into your neighbour’s house, you are only liable for trespass if you intended for your dog to enter their house or were negligent in restraining the dog.

Other examples of trespass and nuisance can be any of the following:

What is the law of trespass?

To prove a trespass action in court you will have to be able to prove the following elements:

If you cannot prove the above things, your claim for trespass might fail.

Certain types of people do not need permission to enter or remain on your land. For example, police officers with a search warrant, meter readers for electricity or gas companies, and some types of construction workers such as surveyors. These people are very limited in what they are allowed to do and they can lose their authorisation if they do anything outside of those limits.

Under the Civil Law (Wrongs) Act 2002 (ACT), your claim for trespass can also fail if the person was negligent but has not made any claim on your land and made a reasonable offer to ‘make amends’ before a court. This can occur if the wrongful party apologises or offers to pay for any damage.

What are your rights?

If you think a trespass has or is occurring, or you fear for your safety, you should first call the police. Trespass can be a criminal offence in the ACT under the Trespass on Territory Land Act 1932 (ACT) and police or specially appointed inspectors have the power to prosecute these offenders.

You can also write a ‘letter of demand’ which might save the time and cost of going to court. The letter should explain what the nuisance or trespass is and what you want done to fix it. It should also include a date you want a response by. You can also say that if no response is received that you intend to take the matter to court.

Finally, you can also take court action against the person or people responsible. In this case you have six years to commence your action. Generally, the amount of damage the trespass caused will determine which court or tribunal will deal with the claim. The following table demonstrates the jurisdiction of each applicable court and tribunal:

Different procedures and legislation apply to these courts but the process generally involves filling out an application form detailing your complaint and attaching any evidence for it.

If your case is successful, the court or tribunal will usually order the person to take steps to fix the trespass or nuisance. Depending on the case, the tribunal or court may also award damages or compensation. A failure to abide by these rulings is contempt of court and can be punished severely by fines or even imprisonment.