If you have been charged with an offence, you are presumed to be innocent until it is proven that you are guilty. As a result, you have a qualified right to be free until a Court decides whether you are guilty. In Western Australia, there are some situations where you might be kept in custody (on remand) until you are required to appear in Court and answer to the charges, and in these situations bail will be refused. For example, the police may suspect that you will not attend your scheduled Court hearing and a decision can be made to keep you in police custody until that time. 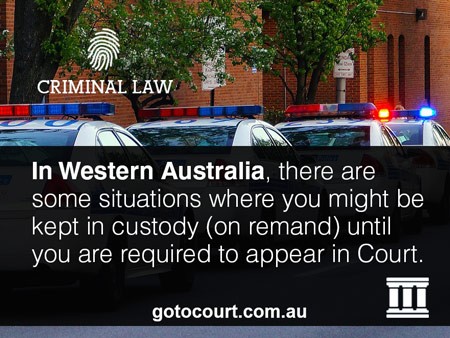 Bail is the authorisation for the release from custody of an accused person charged with a criminal offence.  It gives an accused the right to remain at liberty, rather than in custody in a prison or detention centre, while waiting for the charge to be finalised in court.  In Western Australia, the principles and procedures regarding bail are governed by the Bail Act 1982.

The decision for or against bail can be made by a police officer after a person has been arrested and given a notice to attend Court. This is known as “police bail”. If the accused is not granted police bail, a police officer must bring him or her before a Court as soon as practicable for a Magistrate to hear the matter or decide whether to grant bail until a further appearance in Court. This is called “Court bail”.

If you are in custody after being charged with an offence, in most circumstances you will be entitled to have your case for bail for that appearance considered by the police as soon as practicable. In making a bail decision, a police officer will normally take into account the likelihood of you appearing at your next Court hearing and the risk of you interfering with witnesses, absconding or destroying evidence. If you are granted “police bail” you may have to sign a Bail Undertaking which places restrictions on what you may do whilst on bail.  If bail is refused by police then under the Bail Act 1982, you must be taken before a Court as soon as reasonably practicable. At the Court appearance either you or your lawyer can make a bail application.

If you make an application for Bail, the Court can either dispense with bail, grant bail (with or without the imposition of bail conditions), or refuse bail. In considering a bail application the Court must consider a range of factors as set out in Schedule 1, Part C of the Bail Act 1982. These factors include making a determination as to whether, if you are not kept in custody, you will:

In considering whether either of these will occur the Court must also consider under Schedule 1, Part C, Clause 3 of the Bail Act 1982:

Offending whilst on bail

The Bail Act 1982 states that in cases where the accused has committed a serious offence (listed at Schedule 2 to the Act) when released on bail (or on an early release order) for another serious offence, bail will be refused unless there are exceptional reasons why the accused should not be kept in custody. The Court has wide discretion as to what constitutes exceptional circumstances, but these can include your age and health status, the length of the likely delay before you would be brought to trial and the strength of any defence you may have. This same process applies if you have been charged with murder.

Bail may be granted subject to specific conditions. Schedule 1, Part D of the Bail Act 1982 specifies the conditions that may be imposed when granting bail. You may be required to enter into a personal undertaking, a surety undertaking, reside at a fixed address and/or report to police.

What can you do if the Court refuses bail?

If a Court denies your request for bail, then you cannot make a further application before a magistrate unless there are new facts or circumstances, a change in circumstances or a past failure to adequately present a case for bail. You may, however, apply for reconsideration of the decision before a judge (usually in the Supreme Court).